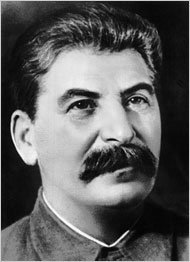 Joseph Stalin (1879-1953) was a Russian revolutionary aligned with Vladimir Lenin and the Bolshevik faction. Though not a significant party leader during the October Revolution, his accumulation of power during the early and mid-1920s allowed him to eventually gain control of both the party and the Soviet republic.

Stalin was born Ioseb Dzhugashvili to an impoverished family in Gori in rural Georgia. His father, a cobbler, drank heavily and was abusive to his wife and children. Dzhugashvili was educated at the town’s religious school where he learned to speak Russian as well as Georgian and developed ambitions to join the priesthood.

Dzhugashvili entered a seminary in the Georgian city of Tiflis but his growing interest in socialism, particularly that espoused by Karl Marx, interrupted his studies. He worked briefly as a clerk before joining the Social Democrats in 1900 and, after the 1903 split, the Bolsheviks.

Dzhugashvili’s early contribution to Bolshevism was practical rather than ideological. He raised funds for the Bolshevik movement by leading an “expropriations” group. Dzhugashvili was a leading organiser of the 1907 Tiflis bank robbery that killed dozens of people and netted the Bolsheviks more than 340,000 rubles.

These activities made Dzhugashvili a wanted man. He was arrested seven times and spent much of the decade before 1917 either in prison or in exile. It was during this period that Dzhugashvili began using the codename Stalin, meaning ‘man of steel’. Lenin and his close companions called him “Koba”, the name of a bandit in a popular Russian novel.

Stalin’s reputation in the party was that of a ‘doer’ rather than a ‘thinker’, though he did write several essays espousing Marxist-Leninism and was involved in the production of propaganda. When Lenin broke permanently from the Mensheviks in 1912, he elevated Stalin to the Bolshevik Central Committee.

After the abdication of Nicholas II, Stalin returned to Petrograd and, as one of the few significant Bolsheviks in the capital, took over the editorship of Pravda. In his first editorials, Stalin pledged to support the Provisional Government. After April, Stalin fell in behind Lenin, supporting the overthrow of the government.

Through 1917, Stalin continued in charge of Pravda while managing Lenin’s personal security. He was actively involved in organising the October Revolution and later praised Trotsky for his planning and oversight of the seizure of power.

During the Civil War, Stalin served in the Politburo, Sovnarkom and as Commissar for Nationalities, a portfolio that gave him responsibility for non-Russians in the old empire. He also spent time on the battlefield, commanded Red Army and Cheka units and showed a willingness to employ violence and terror to achieve his objectives.

In 1922, Stalin was appointed General Secretary of the Communist Party. This was a bureaucratic role rather than an obvious position of power, however, Stalin was able to use it to build support within the party hierarchy. While Stalin quietly accumulated power, his rivals, who included Trotsky and Grigory Zinoviev, disregarded him as a minor player.

Stalin also laid the groundwork for a cult of personality by promoting his connections with the ailing Lenin. When Lenin died in January 1924, he left behind a ‘political testament’ that was strongly critical of Stalin – but Stalin was able to manipulate the distribution of this document to minimise its impact.

During the mid-1920s, Stalin secured control of the Soviet Union by forming a tripartate alliance with his previous rivals, Zinoviev and Lev Kamenev. With their support, he was able to sideline Trotsky and, in time, have him expelled from the party. Trotsky was eventually killed in exile by a Stalinist agent in 1940.

By the late 1920s, Joseph Stalin was entrenched as the leader of the Communist Party and the Soviet Union. The policies he implemented transformed and modernised the Soviet Union at a significant pace but they came at enormous human cost.

By the end of World War II, Stalin was arguably the most powerful leader in the world. His iron-fisted rule of the Soviet Union lasted for a quarter of a century until his death from a major strike in March 1953.