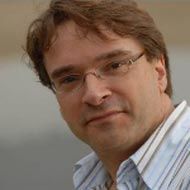 Like Simon Schama, Orlando Figes is a British historian whose popularity has extended beyond academia and into general readership. His books about Russia, particularly A People’s Tragedy and Natasha’s Dance, have proved popular with teachers and students alike.

Orlando Figes was born in London and raised by his mother, a Jewish-German writer and feminist who fled Nazism in the late 1930s. He was educated at a local grammar school before enrolling to read history at Cambridge. At Cambridge, Figes completed an honours degree, then a PhD under the supervision of controversial historian Norman Stone. Figes’ doctoral thesis studied the activities of peasants in the Volga region in the first years of the Russian Revolution.

Figes’ first major book, A People’s Tragedy, was published in 1996. The winner of several literary and history awards, it chronicles the history of Russia from its devastating 1891 famine through to 1924.

Others have variously categorised Figes as a liberal-conservative or a revisionist. He is critical of Vladimir Lenin, accusing the Bolshevik leader of laying the groundwork for Stalinist totalitarianism, repression and genocide. Figes also tends to view revolutionary groups and parties as chaotic collectives of individuals, rather than genuine mass movements.

Figes’ writing style employs a sweeping narrative and seeks to strike a balance between important events and their impact on individuals. He gives less time and attention to political ideology than other historians. His main concern is with ordinary Russians and their motivations and conditions. Because of this, Figes tends not to rely on the writings of Marx or Lenin as a point of reference.

One of Figes’ approaches is to focus on the cultural aspects of the revolution, such as words, language, symbols, propaganda, mood and other psychological devices. A revolution may start with political aims and slogans – but Figes examines how revolutionary ideas reach, affect and motivate ordinary people.

Figes has come in for criticism from his fellow academics. He has been described by some as a ‘historical journalist’ while others have accused him of taking creative liberties with evidence. In 2010, Figes agreed to pay damages to Robert Service and another historian, after admitting to posting negative reviews and comments on an Amazon website.

“In the mind of the ordinary peasant, the Tsar was not just a kingly ruler but a god on earth. [The peasant] thought of him as a father-figure who knew all the peasants personally by name, understood their problems in all their minute details, and, if it were not for the evil boyars who surrounded him, would satisfy their demands. Hence the peasant tradition of sending direct appeals to the Tsar.”

“Whereas in Western countries the constitution merely had to guarantee the rights of a pre-existing civil society and culture, in Russia it also had to create these. It had to educate society – and the state itself – of the values and ideas of liberal constitutionalism.”

“The Romanov regime fell under the weight of its own internal contradictions. It was not overthrown.”

“The link between literacy and revolutions is a well-known historical phenomenon. The three great revolutions of modern European history – the English, the French and the Russian – all took place in societies where the rate of literacy was approaching 50 per cent. Literacy had a profound effect on the peasant mind and community. It promotes abstract thought and enables the peasant to master new skills and technologies.”

“The terminology of the Revolution was a foreign language to most of the peasants (as indeed it was to a large proportion of the uneducated workers) in most parts of Russia. Equally, the new institutions of the state appeared strange and alien to many of the peasants.”

“For all too many of these high-born revolutionaries, the main attraction of ‘the cause’ lay not so much in the satisfaction which they might derive from seeing the people’s daily lives improved, as in their own romantic search for a sense of ‘wholeness’ which might give higher meaning to their lives and to end alienation from the world.”

“Convinced that their own ideas were the key to the future of the world, that the fate of humanity rested on the outcome of their own doctrinal struggles, the Russian intelligentsia divided up the world into the forces of ‘progress’ and ‘reaction’, friends and enemies of the people’s cause, leaving no room for doubters in between. Here were the origins of the totalitarian world-view.”

“Lenin did weight training to build up his muscles. It was all part of the macho culture (the black leather jackets, the militant rhetoric, the belief in action and the cult of violence) that was the essence of Bolshevism.”

“Nowhere [more than Russia] has the artist been more burdened with the task of moral leadership and national prophecy, nor more feared and persecuted by the state.”