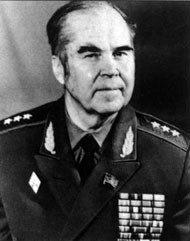 Dmitri Volkogonov began his career as a high-ranking Soviet military officer who specialised in psychological warfare. Towards the end of his service, he turned his attention to history and became the leading exponent of Soviet revisionism.

Volkogonov was born in eastern Siberia, the son of a Soviet official who managed a collectivised farm and a schoolteacher. When Volkogonov was nine, his father was whisked away by Stalinist agents and executed, for reasons not explained to the family.

In 1945, Volkogonov joined the Red Army. He gained a commission and studied extensively at Soviet military academies, eventually obtaining a doctorate. Much of his later military service was focused on studying and producing Cold War propaganda and material on psychological warfare.

To outsiders, Volkogonov would have appeared a typical hardliner, loyal to the military, to Soviet socialism and the state. Behind the scenes, however, Volkogonov’s views were shifting. In the late 1970s, he began researching for a biography of Joseph Stalin.

Volkogonov’s conclusions condemned not only Stalin’s political leadership and military strategies but also his character.

These controversial manuscripts remained unpublished for years until the rise of Gorbachev and glasnost in 1988. Once released, they rendered Volkogonov unpopular, particularly with his military bosses, who discharged him from the service.

Volkogonov continued his research, delving into once-closed Kremlin archives and penning histories that picked at the shortcomings of Soviet leaders – even icons like Vladimir Lenin and Leon Trotsky. It was during this research that Volkogonov uncovered the reason for his own father’s execution (possessing a pamphlet written by Nikolai Bukharin).

His works were eventually translated by Harold Shukman and released in the west.

“Looking back, one is astounded by the forbearance of the Soviet people, above all, the Russian people. Where does it come from? 250 years of Tatar dominion, or the succession of wars for liberation and freedom? Or having to struggle with the Russian winter and the great expanses of territory? Or was it bred of the wisdom of historical experience, their faith that they were in the right and their loyalty to their historical tradition? Perhaps it was the conviction that they had taken the right course in 1917.”

“Many biographers and people who met Lenin attest to the enormous ‘physical force’ of his mind. Perhaps this was because he usually crushed his opponent in argument with his absolute refusal to compromise; perhaps it was the uncompromising convictions themselves, the one-dimensional, virtually fanatical convictions. In any event, many people began to stress the force of Lenin’s mind and relate it to the shape of his head. Lunacharsky, for instance, remarked that ‘the structure of his skull is truly striking’.”

“By concentrating on the organisation factor as the wall dividing the two wings of the [SD] party, aspects of far greater significance were pushed into the background. In fact, the true line dividing Bolsheviks and Mensheviks was not the issue of organisation. The only true social democrats were the Mensheviks… Democracy for them was a permanent value, not a political front. The Bolsheviks, by contrast, became increasingly convinced of the value of violence. When they came to power, they believed they had conquered not only the bourgeoisie but also their former party comrades, the Mensheviks.”

“When the Russian people had been driven to the limit by the war, and state power in effect lay in the streets of the capital, the Bolsheviks obtained power with remarkable ease, in exchange for the promise of peace. Lenin’s call to civil war was forgotten, but having gained power, he felt he had to go further; socialism seemed so close. If yesterday’s men could be swept away, one could go on with the great experiment unhampered.”

“Losing Lenin at the crucial moment, when the historic decision had to be made about what methods should be used to build socialism, the Communist Party entered a phase of fierce internal strife. The Leninist old guard was not sufficiently alert to the danger Stalin posed both to the party and the still insecure state.”

“The famine … was appalling. People were eating dead bodies, although the Politburo banned any mention of cannibalism in the press. On 23 February 1922, the public learned from their newspapers that a government decree had been issued on the forcible confiscation of all valuables from Russian churches. It was not stated that this decree had first been personally approved by Lenin.”

“Only Stalin knew the whole truth about himself. He liked things to be in black and white, yet he did everything to ensure that his life story would be told in bright colours.”

“In 1938 … many of Trotsky’s intellectual friends began asking themselves at what point and from what source the Stalinist terror and the violent, anti-democratic character of the Soviet regime had originated. For [some] the rot had begun with the crushing of the Kronstadt revolt in March 1921. They now publicly raised the question of Trotsky’s personal responsibility. One declared unequivocally that this use of force against those who thought differently from the Bolsheviks had signalled a shift to repressive policies in the Soviet republic while Lenin and Trotsky were still in power. Had Trotsky not led the punitive expedition himself? In what way was he superior to Stalin?”

“However doomed a man may be, he still has the great luxury of freedom of thought that can carry him soaring over the past and the future, the single attribute that can never be taken away by tyrant or circumstance.”

[From a 1995 interview] “History has literally led me to a complete denial of all that I had been praying for my whole life… I feel very happy that by the end of my life I’ve freed myself from this horrible nightmare, this primitivism… The only thing I can be proud of, the greatest merit of my life, is that I was able to fundamentally alter my views.”

This Russian Revolution site contains articles, sources and perspectives on events in Russia between 1891 and 1927. This site is created and maintained by Alpha History. It contains 172,024 words in 274 pages and was last updated on June 11th 2020. For more information, visit our FAQ page or Terms of Use.