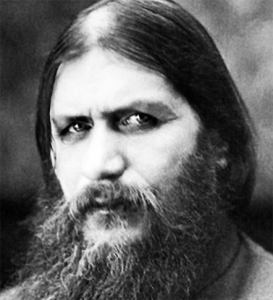 Grigori Rasputin (1869-1916) was a Siberian-born faith healer and starets (‘spiritual teacher’) associated with the royal family in the years prior to revolution. Rasputin exerted a degree of influence over the royal family, particularly Tsarina Alexandra, a relationship that fuelled rumours, criticisms and anti-tsarist propaganda.

Rasputin was born Grigori Yefimovich Novykh in Pokrovskoe, a village near Tobolsk in western Siberia. His father, Yefim, bought and sold horses for a living and could not afford to educate his children. Two of Novykh’s siblings, Dmitri and Maria, both drowned in the local river.

Apocryphal stories suggest that Novykh demonstrated psychic or telepathic qualities as a child, though they are apocryphal. Documented accounts say he was very tall (standing at 6’4″ or 193 centimetres) and given to drunkness, sexual promiscuity and inappropriate behaviour, particularly towards local women.

As a teenager, Novykh became a self-declared mystic and began calling himself Rasputin, a name taken from the confluence of two rivers near his hometown. He entered a monastery at Verkhoture with the intention of becoming a monk but abandoned this to marry at the age of 18.

Rasputin and his wife, Praskovya, had three children. His religious ambitions remained unthwarted, however, and he abandoned them to embark on a pilgrimage to Greece and the Holy Lands, in the hope of becoming a prophet. He made this journey mostly on foot.

In 1904, Rasputin travelled to St Petersburg. He arrived in the capital and despite being a self-declared holy man and not ordained by the Russian Orthodox church, managed to win over the city’s bishop.

Rasputin soon acquired a reputation as a preacher and spiritual counsellor. One of his clients, and possibly lovers, was Anna Vryubova, a lady-in-waiting and a confidante to Tsarina Alexandra. It was either Vryubova or two Montenegrin royals, Prince Militsa and Princess Anastasia, who recommended Rasputin to the royal family.

As is well known, Alexandra’s confidence in Rasputin stemmed from his apparent ability to ease the suffering of her son, Alexei, during his haemophilic episodes. Historians and medical experts are divided about how and to what extent Rasputin was able to achieve this. Some have suggested Rasputin used hypnosis, massage or a concoction of herbal treatments or drugs. Others believe Rasputin’s calming demeanour and his shooing away of over-attentive court physicians may have helped the boy.

Whatever the reality, the Tsarina came to associate Rasputin’s presence with Alexei’s good health and happiness. The Tsar, though sceptical about Rasputin and angered by the negative publicity he generated, was not inclined to change a religious figure – or, indeed, his wife. Nicholas was also given to forming tokenistic relationships with peasants like Rasputin, believing they kept him in touch with the people.

When not providing relief to Alexei and Alexandra, Rasputin spent much of his time in nefarious social activities. He became a regular counsellor to aristocratic and affluent bourgeois women – and openly boasted of sleeping with them. At night, Rasputin could often be found in St Petersburg’s seedier districts, frequenting bars and brothels. There were press accounts of him drunkenly exposing his penis and claiming to have bedded the Tsarina.

But for World War I, Rasputin may have remained a historical curiosity. The advent of war, however, allowed the Siberian faith healer to actively participate in the national government, drawing criticism and shame to the regime.

When Nicholas took command of the army in September 1915, Alexandra was left in de facto control of the government – and she had Rasputin in her ear, constantly advising on ministerial positions and matters of policy. Rasputin’s meddling instigated the sacking and replacement of some ministers. To give just one example, the appointment of Alexander Protopopov as interior minister in September 1916 was largely Rasputin’s doing.

Leaving government in the hands of a German-born woman and a Siberian peasant of questionable conduct generated a wave of pointed and often smutty propaganda that further undermined tsarism.

Recognising that Rasputin’s antics placed the Tsar and his regime in danger, conservatives began plotting against the Siberian starets. In December 1916, Rasputin was murdered by Prince Felix Yusupov, Grand Duke Dmitri Pavlovich and Vladimir Purishkevich, who had earlier condemned him in the Duma. After luring Rasputin to Yusupov’s palace, they poisoned him (with apparently no effect), shot him several times and tossed his body into the frozen Neva River.

A historian’s view:
“Repeated warnings were sent to Nicholas of the escalating danger to the throne [posed by Rasputin]. His uncle, Grand Duke Nikolai Nikolaevich, begged him to stop his wife from bringing the monarchy into further disrepute by meddling in the affairs of government. ‘You stand on the eve of an era of new troubles’, he warned… In this atmosphere of strained suspense, people were talking openly about the need for a palace coup and for the Empress to be shut up, out of harm’s way, in a nunnery. Unrestrained innuendo and gossip about the ‘Dark Powers’ that she and Rasputin represented were the sole topic of conversation in the exclusive clubs, where ‘Grand Dukes played quinze and talked of saving Russia’.”
Helen Rappaport

Citation information
Title: “Grigori Rasputin”
Authors: Jennifer Llewellyn, Steve Thompson
Publisher: Alpha History
URL: https://alphahistory.com/russianrevolution/grigori-rasputin/
Date published: May 21, 2019
Date accessed: January 27, 2023
Copyright: The content on this page may not be republished without our express permission. For more information on usage, please refer to our Terms of Use.