Until the February Revolution, the Russian Empire was governed by tsarist autocracy. A system with medieval origins, autocracy assumed the tsar’s absolute power, drawn from his divine right to rule. In a nation as vast as Russia, maintaining and enforcing this autocracy depended not just on military force but ideology and culture.

The role of religion

The Russian tsar claimed to rule by ‘divine right’, that is, his power and authority were derived from God rather than the people. In the Fundamental Laws of 1906, Russians were told to obey the tsar, “not only out of fear but also for the sake of conscience”, as he had been “ordained by God”.

The Russian Orthodox Church was an integral part of tsarist autocracy. The church’s governing council, the Holy Synod, was a de facto government department. Tsar Nicholas II, a deeply religious man, consulted regularly with its prelates and clergymen.

The church also promoted and reinforced tsarism among ordinary Russians. It encouraged them to accept and embrace tsarist autocracy. Its catechisms taught worshippers it was God’s will that they should love and obey the tsar.

If the church was the mouthpiece of Russian autocracy, the military was its iron fist. The tsar’s Imperial Army was one of the most feared military forces in Europe, more because of its size rather than its technical or tactical prowess.

Russia’s army was the largest peacetime standing force in the world. It fluctuated in size but generally contained more than 1.5 million men. Soldiers in the lower ranks of the army were conscripts, requisitioned from peasant communes as the need arose.

Few conscripts were happy with this arrangement because life in the Russian military was stern, fatiguing and notoriously brutal. Officers imposed strict discipline; beatings, whippings or deductions of pay were common. Most soldiers lived in ramshackle barracks, victualled with sub-standard food and provided with poor uniforms and equipment.

By the outbreak of World War I, around one-quarter of infantry soldiers had not been issued with a rifle. There were many soldiers who had not even fired one, in training or otherwise. These conditions created discontent and occasional mutinies, though they were swiftly dealt with and suppressed. 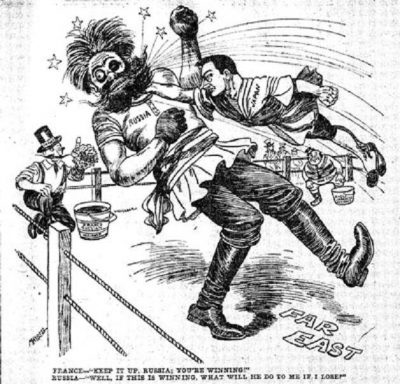 One of the Russian military’s shortcomings was its officer class which, compared to recently modernised forces like the Prussian army, was of poor standard.

The Imperial Army, in particular, had a shortage of career officers, possibly because of inadequate prospects for promotion and reward. A large number of Russian officers obtained their commission through birthright, noble titles or sponsorship rather than merit or achievement. As a consequence, there was a real problem with motivation and competence.

The inadequacy of Russian officers was exposed during the 1904-5 war with Japan and in the first months of World War I. Battlefield defeats in both conflicts suggested either a lack of tactical understanding of combat, a gross underestimation of the enemy, or both.

Problems in the navy

These problems were no better at sea. Russia’s large navy, once a source of pride for the tsar, was not the imposing force it had once been. The late 19th and early 20th century, naval spending programs completed by Britain and Germany had not been matched by the tsarist government.

By the war with Japan in 1904-5, Russia’s Pacific and Baltic fleets were ageing, cumbersome and, like some army divisions, not particularly well commanded.

Defeat in the Russo-Japanese War in 1905 was disastrous for both the tsar and his government. That one of the great powers of Europe could be defeated by a small Asian nation was not just humiliating, it was clear evidence that modernisation was needed.

Lack of industrial base

This was true not just of the army but also the industrial sector that supplied it. Historians Nik Cornish and Andrei Karachtchouk describe this process:

“It became clear that reform of the armed forces and industrialisation would have to proceed together. Domestic production of small arms and field artillery was sufficient, but for heavier artillery, communications equipment and other modern necessities it was woefully inadequate. It was necessary to import these items until Russian industry could produce what was required. The period 1910-14 saw change on a scale unprecedented during peacetime: rates of pay were increased to encourage the retention of experienced men, hundreds of officers were retired as incompetent, conscription was expanded to create a larger reserve pool, and the military budget was increased. Inevitably there was some opposition to these reforms, which polarised into hostility … consequently, reform was implemented only slowly.”

Whatever its wartime shortcomings, the army remained a crucial component of tsarist autocracy. To the peasantry and to dissidents in the cities, the Imperial Army was an imposing deterrent. Though it was rarely deployed domestically in any significant numbers, it was always available. One historian described the army as “the visible broadsword, complementing the hidden dagger of the Okhrana (secret police)”.

Despite its lack of the latest weaponry or technology, and regular shortages and under-equipment, the military drained almost 45 per cent of government revenue. In contrast, public education received just four per cent.

Tsarism was also protected and bolstered by a systematic program of censorship, counter-revolutionary espionage and police activity.

The last and best-known tsarist secret police force was the Okhrana, formed in the wake of the 1881 assassination of Alexander II. The Okhrana had humble beginnings, starting as two separate secret police posts – but as the number of Marxist and anarchist groups expanded in the 1890s, so too did the number of Okhrana.

By 1911, there were more than 60 security stations scattered around Russia – and even in European cities like Paris, where Russian revolutionaries-in-exile were active.

The assassination of Pyotr Stolypin in 1911 and other internal scandals prompted a winding-back of the Okhrana prior to World War I. A significant amount of counter-revolutionary intelligence was shifted to specialist military units and branches of the gendarmes (civilian police). 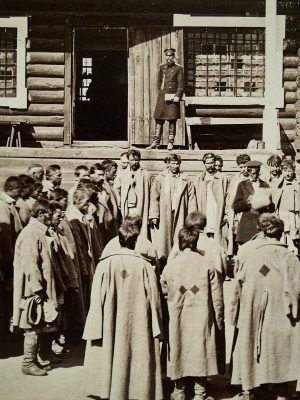 At its peak in the early 1900s, the Okhrana used and refined secret police methods now considered as standard. They included, but were not limited to covert surveillance, infiltration, espionage, interrogation, the use of paid informants, agent provocateurs, torture and extra-legal killing.

Many Okhrana methods were adopted and embraced by later secret police units and intelligence agencies. Historian Richard Pipes points out that KGB manuals written as late as the 1970s were little more than rehashed Okhrana manuals.

Among the innovations implemented by Okhrana chiefs like Sergei Zubatov and Vyacheslav von Plehve were the maintenance of comprehensive files on revolutionaries and suspected dissidents, containing background information, fingerprints, aliases and photographs. Another was the forgery of provocative material, such as the Protocols of the Learned Elders of Zion, created to stimulate prejudice and violence against Russia’s five million Jews.

The Okhrana also kept a close watch on the industrial workforce, which it rightly viewed as a potential crucible for revolutionary ideas. Okhrana agents worked inside factories to form ‘official’ trade unions (zubatovshchina) as a means of monitoring and regulating worker dissent and activism.

In 1910, the Okhrana had more than 20,000 paid informants and double-agents on the payroll. Each of these informants received 100 rubles a month, more than double the monthly wage of the average industrial worker. Georgy Gapon, leader of the January 1905 march that ended with the ‘Bloody Sunday‘ killings, began his involvement with St Petersburg steelworkers as an Okhrana plant.

Illegal groups were also infiltrated by Okhrana agents and informers, who were tasked with identifying and monitoring potential trouble-makers. Agent provocateurs were instructed to stir up anti-government unrest, to flush out individuals with radical political beliefs.

Once the Okhrana captured suspects, there were few constraints on how it dealt with them. Examination of official files after the 1917 revolution suggested the Okhrana was responsible for more than 26,000 extra-legal killings.

Those not executed were dealt with in other ways. The more fortunate were sentenced to ssylka, a form of internal banishment where individuals were sent to live and work in remote parts of the empire. Others were sentenced to long periods in the katorga, a network of remote labour camps in Siberia, the forerunners to Stalinist gulags.

Katorga inmates were forced to undertake mining, farming or construction work in appalling conditions. Some were conscripted to complete work on the Trans-Siberian Railway or other infrastructure projects.

By the time of the Russian Revolution, the number of inmates in katorgas had dwindled to below 30,000. Among those to spend time in the katorgas were Vladimir Lenin, Bolshevik security head Felix Dzerzhinsky and the renowned novelist Fyodor Dostoyevsky.

A historian’s view:
“Like many other espionage agencies, the secrecy surrounding the Okhrana meant that it has been the subject of rumour, exaggeration and myth. It was frequently referred to by the totalitarian school as a prototype of the all-seeing Big Brother police system, and yet the Okhrana was a relatively small organisation, with only a few thousand employees in a country of 140 million people. It has been cited both as one of the principal causes of the revolution and as the pillar of Russian reaction. Many have presented the Okhrana as evidence of the anachronistic and backward nature of the late imperial regime, yet it was a technological and methodological innovator in the arts of political control and surveillance.”
Ian D. Thatcher

1. The tsarist autocracy was reinforced by claims to divine right and the teachings and political involvement of the Russian Orthodox Church.

2. The Russian military also enforced tsarist autocracy by serving as a significant deterrent to domestic dissent or uprisings.

3. Russia had Europe’s largest peacetime army, averaging around 1.5 million men – but it was underequipped and poorly led.

4. The tsarist secret police, the Okhrana, also played an important role in identifying, tracking down and dealing with political subversives.

5. The Okhrana used a variety of methods to suppress or eliminate political opposition, from informants and intelligence-gathering to extra-legal killings.

Citation information
Title: “Enforcing Russian autocracy”
Authors: Jennifer Llewellyn, Michael McConnell, Steve Thompson
Publisher: Alpha History
URL: https://alphahistory.com/russianrevolution/enforcing-russian-autocracy/
Date published: May 13, 2019
Date accessed: May 22, 2022
Copyright: The content on this page may not be republished without our express permission. For more information on usage, please refer to our Terms of Use.