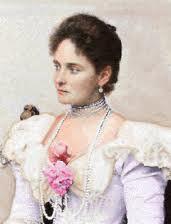 Alexandra (1872-1918) was the Tsarina (queen consort) of Imperial Russia during the reign of her husband, Nicholas II, and the mother the Tsarevich, Alexei, and Olga, Tatiana, Maria and Anastasia.

Many accounts accuse Alexandra of discrediting the Romanov dynasty with her political interventions, her dubious friendship with Grigori Rasputin and her reinforcement of Nicholas’ conservative views. Historians are divided about the extent of her influence.

Alexandra Feodorovna was born in the German state of Hesse in June 1872. She was the daughter of a Hessian grand duke and a granddaughter, through her mother’s line, of Queen Victoria of Great Britain. Throughout her life, family and friends referred to her as Alix.

Alexandra met her second cousin, Tsarevich Nicholas Romanov, in 1884. They spent several weeks together in the summer of 1889 and fell in love. Nicholas was eager to marry but both his father and Queen Victoria opposed the union. The Tsar relented due to his own failing health and Nicholas proposed in April 1894.

Any marriage required Alexandra to enter the Russian Orthodox faith. Reluctant to abandon her Lutheranism, she refused at first before accepting a second proposal. Alexandra became a devoted adherent to her new religion and the couple were married in November 1894, just three weeks after Alexander III’s death.

Unlike other 19th-century royal unions, Nicholas and Alexandra’s marriage was based on love and affection rather than political expediency. They wrote sincere and passionate letters, addressing each other with a list of nicknames including “Sunny”, “Lovey”, “Spitsbub” or “Pussy-Mine”.

In November 1895, a year after their marriage, Alexandra gave birth to the couple’s first child, Grand Duchess Olga. The couple was crowned Tsar and Tsarina in May 1896. Alexandra would bear four more children: Tatiana (June 1897), Maria (June 1899), Anastasia (June 1901) and a long-awaited son, Alexei (August 1904).

Alexandra was unpopular with Russia’s people as well its noble elite. She was nervous and aloof in public, behaviour that was often mistaken for coldness or arrogance. In private, she was prone to fits of temper, melancholia or even depression. She could also be strong-willed and obstinate, particularly in matters of politics or government.

Alexandra is perhaps best known for her friendship with Grigori Rasputin, the Siberian faith healer who ingratiated himself into the royal family sometime around 1911. Her acceptance of Rasputin is not surprising: the Tsarina was desperate for solutions to Alexei’s haemophilia, conventional doctors had achieved nothing and Rasputin was able to exploit her deep religious faith.

It is unlikely that Alexandra and Rasputin were ever lovers, as suggested by contemporary propaganda, but she was convinced of his piety and willingly accepted his advice. As a consequence, Rasputin was able to manipulate and exploit her. This was particularly evident from late 1915 to early 1917, when Nicholas spent long periods at the front and Alexandra ruled in his stead.

Alexandra’s relationship with her husband also had political ramifications. The Tsarina was strident in her support of Nicholas but also fed his conservative and reactionary instincts.

In addition to Rasputin’s self-serving recommendations, Alexandra encouraged the Tsar to ignore advice from competent statesmen and suggested that others were plotting against him. She also failed to identify the dangerous popular unrest that eventually became the February Revolution.

After the February Revolution and Nicholas’ abdication, Alexandra and their family were held under house arrest in their palaces then moved to Tobolsk, Siberia. Efforts to find a home in exile proved fruitless, in part because of Alexandra’s German heritage and false but widespread press reports that she was a German spy.

After the October Revolution, they came under the control of the Bolsheviks, who in April 1918 moved the family to Ekaterinburg. In the early hours of July 17th, Nicholas, Alexandra, their children and servants were shot to death in the basement of the Ipatiev House. Examination of her remains decades later suggests the Tsarina died from a single gunshot wound through the head.

A historian’s view:
“As tsarina, Alexandra cut an awkward figure. Her chief characteristics were her Victorian insistence on ‘good works’ and her religiosity. She had been schooled according to the strict, self-denying values of her grandmother [Queen Victoria]. Her attempt to introduce sewing circles among the ladies of the Russian high aristocracy underlined her eccentricity. Alexandra balanced her alien characteristics with a mania for the Russian Orthodox Church. She had the enthusiasm of the convert (in her case, from Protestantism). Her tendency to mysticism and spiritualism was not unusual for the time… St Petersburg was a magnet for religious cranks and faith healers, some of whom were taken in by high society.”
Jonathan Bromley