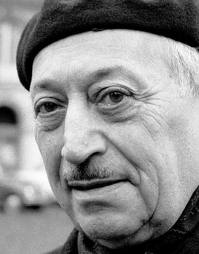 Simon Wiesenthal (1908-2005) was a Jewish-Austrian architect who survived several Nazi labour and concentration camps during the Holocaust. He became arguably the best-known hunter of fugitive Nazi war criminals after World War II.

Wiesenthal was born in Galicia, Austria-Hungary, his family arriving there two years earlier after fleeing anti-Jewish pogroms in Russia. His father was conscripted into the Austro-Hungarian army in 1914 and died in action in World War I.

Wiesenthal remained in Galicia after the war. He completed high school and moved to Prague to study architecture (he was unable to study in Galicia due to restrictions on the numbers for Jewish students). He returned to his homeland in the mid-1930s, married and worked for local firms in Lwow.

When the Soviet Red Army occupied eastern Poland in September 1939, Wiesenthal and his family were subject to restrictions and threatened with deportation. Worse followed when the Nazis invaded in June 1941. Like thousands of other Jews in Lwow, Wiesenthal was conscripted for forced labour, threatened with execution and moved into a hastily constructed ghetto.

At the end of 1941, Wiesenthal was transferred to Janowska, a concentration camp on the outskirts of Lwow. His mother was transported to Belzec, where she later died, while his wife, Cyla, was relocated to Warsaw. Between late 1943 and June 1944, Wiesenthal spent several months in hiding after escaping Janowska.

From this point, Wiesenthal spent time in a succession of labour and concentration camps, including Przemysl, Plaszow, Gross-Rosen, Chemnitz, Buchenwald and Mauthausen. When Mauthausen was liberated by American soldiers in May 1945, Wiesenthal was skeletal and on the brink of death.

In June 1945, despite his continued poor health, Wiesenthal was recruited by the US Army to provide information and gather evidence of Nazi war crimes. He was able to identify numerous suspected war criminals among the Schutzstaffel (SS) officers and camp guards he had encountered. He would spend the next year working for the Americans while assisting Jewish refugees.

During this period, Wiesenthal became obsessed with locating and bringing to justice Adolf Eichmann, the former SS officer responsible for transporting Jews to concentration and death camps. Wiesenthal kept Eichmann’s family in Linz under close surveillance and reconstructed his flight after the German surrender. He provided information to Israeli authorities that proved useful in tracking down Eichmann in South America and bringing him to justice.

Wiesenthal’s involvement in Eichmann’s arrest brought him a degree of fame. He began working for Mossad, the Israeli secret service, gathering information of scores of Nazi war criminals. Wiesenthal later released a book (The Murderers Among Us, 1967) and had a Holocaust remembrance centre in Los Angeles named after him (1977).

Wiesenthal continued pursuing fugitive Nazi war criminals until the death of his wife prompted his retirement in 2003. He died two years later, aged 96.