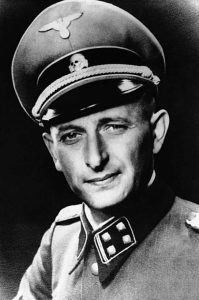 Adolf Eichmann (1906-1962) was an SS officer who played a significant role in organising the Final Solution. He later fled Germany and became a Nazi fugitive but was tracked down and brought to justice by Israeli authorities.

Adolf Eichmann was born to middle-class parents in western Germany. His family were devout Lutherans and as a youngster, Eichmann was taught Bible stories by his grandmother.

After the death of his mother in 1914, Eichmann’s family moved to Austria. His father worked as an accountant and served in the Austro-Hungarian army during World War I. The young Eichmann attended the same high school as Adolf Hitler but was a mediocre student and dropped out before completion. He began vocational training in mechanics but also failed to complete that. He later held several mechanical and clerical jobs during the 1920s.

Eichmann joined both the Austrian NSDAP and Schutzstaffel (SS) in 1932. Two years later, he was accepted into the Sicherheitsdienst (SD) and worked on gathering intelligence on Freemasons and their activities.

In the late 1930s, Eichmann, by now located in Vienna, was tasked with organising Jewish transportation and resettlement abroad. He visited Palestine in 1937 to investigate the possibility of relocating German Jews there en masse. He continued orchestrating Jewish deportations after the outbreak of World War II, first in Prague and then in Berlin. During this period, Eichmann worked under deputy SS leader Reinhard Heydrich.

Sometime in late 1941, Eichmann was made aware of Hitler’s plan to liquidate the entire Jewish population of Europe. He attended the Wannsee conference in 1942, essentially as a minutes secretary to record information.

Eichmann worked as ‘transportation manager’ in the Final Solution, managing the logistics of transporting large numbers of people to the concentration camps. He perfected this role diligently and effectively, obtaining promotions in rank and awards for his efficiency.

A wanted man after the war, Eichmann was arrested by American soldiers but went unrecognised due to the false papers he was carrying. He remained underground in Europe for several years before relocating to South America with his wife and family in 1950. He lived there for a decade under the name ‘Ricardo Klement’.

In 1960, Eichmann was identified and surveilled by Mossad (Israeli secret service) agents. They later arrested Eichmann smuggled him to Israel. He was charged with war crimes, placed on trial and executed in 1962. He died still largely unrepentant about his role in the Holocaust.