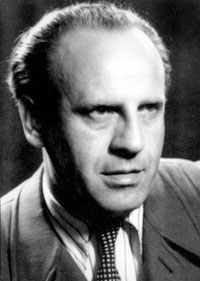 Oskar Schindler (1908-1974) was a German-speaking Czech businessman who ran a wartime business in Nazi-occupied Poland. Schindler’s actions saved the lives of more than 1,100 Jews employed as forced labourers at his factory. Their story was immortalised in the 1982 book Schindler’s Ark and 1993 film Schindler’s List.

Oskar Schindler was born in the town of Svitavy in the Austro-Hungarian Empire. His family were Sudeten Germans and Catholics. Schindler’s father, Hans, made a comfortable living selling farm machinery but was prone to heavy drinking and womanising.

Young Oskar was not a good student and at age 16 was expelled from school for forging a report card. He later graduated from high school but did not enter university, instead taking several technical courses. Schindler worked for his father’s company until his marriage to Emilie Pelzl in 1928.

After marrying, Schindler spent some time in the Czechoslovak army. He struggled to find work during the Great Depression but in 1931 gained employment with a Prague bank, remaining there until shortly before World War II.

In 1935, Schindler joined the Sudetendeutsche Heimatfront, a pro-Nazi party based in Prague. The following year, he became a paid agent for the Abwehr (Nazi military intelligence), apparently because he needed the money. When his homeland was annexed by Germany in late 1938, Schindler joined the NSDAP or Nazi Party.

After the outbreak of war, Schindler relocated to Krakow, Poland on assignment for the Abwehr. In Krakow, he met the first of the Jewish Poles whose lives he would later save. Schindler also became interested in a bankrupted enamelware factory. With Jewish financial backing, he purchased the factory in 1940.

Schindler’s knowledge of the Abwehr and contacts in the German military allowed him to obtain lucrative contracts for supplying metalware. He also cultivated relationships with other significant figures, such as high-ranking Schutzstaffel (SS) and Gestapo officers. He exploited these contacts to maintain and protect the employees of his factory, Deutsche Emailwarenfabrik or DEF.

The arrival of Plaszow labour camp commandant Amon Goeth and the brutal liquidation of the Krakow ghetto in March 1943 were turning points in Schindler’s attitude. He began actively working to secure the safety of the Schindlerjuden, as his Jewish employees were known, often at considerable personal expense and risk. Schindler was himself arrested three times but released after intervention by powerful allies in the SS.

In July 1944, Schindler prevented his Jewish workers from deportation to the death camps by having them relocated to the comparative safety of Brunnlitz, Czechoslovakia. Protected by Schindler and his wife Emilie, almost all survived the war and the Final Solution.

Schindler fled Brunnlitz immediately after the German surrender, fearful of being arrested and executed by the Soviet Red Army for war profiteering. He resettled in southern Germany and later Argentina, failing at several business ventures and often accepting aid from Jewish groups. He died in October 1974 and was buried in the Mount Zion cemetery in Jerusalem.