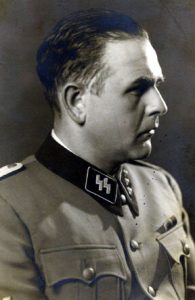 Amon Goeth or Göth (1908-1946) was an Austrian-born Schutzstaffel (SS) officer who commanded the Plaszow labour camp near Krakow, Poland. His fanatical brutality and relationship with Oskar Schindler was depicted in the 1993 film Schindler’s List.

Goeth was born in Vienna to affluent parents who made their wealth from book publishing and sales. The family was Catholic and the young Goeth was raised chiefly by his aunt.

An unremarkable student, Goeth completed high school before studying agriculture. His passion, however, was right-wing extremism. In his late teens, Goeth belonged to at least two anti-Semitic youth brigades or paramilitary groups. He eventually joined the NSDAP and the SS in 1930.

Goeth’s work for the Nazi Party saw him targeted by Austrian authorities during the 1930s, so he spent long periods in exile in Munich. He married 1938 and had three children, though by 1941 he had separated from his wife.

Goeth was conscripted in 1940, serving briefly in the Wehrmacht (army) before transferring to the SS. During 1942, he worked in eastern Poland rounding up Jewish populations and transporting them to camps. The following year, Goeth was transferred to the Totenkopfverbande, the SS’s concentration camp division, and ordered to oversee construction of a labour camp in Plaszow, a southern suburb of Krakow.

Goeth served as commandant of the Plaszow camp until September 1944. During this two-year tenure, Goeth became known for his sadistic and arbitrary use of violence. He frequently ordered summary executions, often as retaliation for escape attempts by others but sometimes for no apparent reason. Some inmates reported that looking at Goeth incorrectly was likely to incur a beating or worse.

By 1944, Goeth’s brutal sadism had become so extreme that it even concerned other SS officers. He was eventually removed from his command and charged with stealing Jewish property, violating regulations and mistreating prisoners through violence and starvation. These charges were eventually dropped in 1945 due to Germany’s imminent defeat.

Goeth spent the rest of the war in a Bavarian asylum, where he was found and arrested by American troops in May 1945. He denied being a member of the SS but was identified by former prisoners and deported to Poland. Goeth was placed on trial in Krakow, convicted of murdering an unknown number of people and sentenced to death. He was hanged in September 1946.