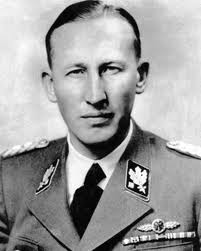 Reinhard Heydrich (1904-1942) was a high-ranking Schutzstaffel (SS) officer who served as Heinrich Himmler‘s second in command, overseeing security and laying the groundwork for the Final Solution.

Heydrich was born in Halle, Saxony to a family of musicians. He was too young to see service in World War I but as a teenager took up membership of the nationalist Freikorps and was associated with anti-Semitic groups.

As a boy, Heydrich had long coveted a military career. He joined the German navy in 1922 and completed officer training. In 1931, he was dishonourably discharged from the navy for having an affair with one woman while engaged to another. Heydrich later married his mistress, Lina von Olsten, also a Nazi sympathiser.

After his expulsion, Heydrich joined the National Socialist party and the SS. An imposing figure with a distinct Aryan appearance and military bearing, Heydrich became a significant SS leader in Hamburg.

Impressed by Heydrich, Himmler placed him in charge of the Sicherheitsdienst or SD, the SS’s intelligence-gathering and security branch. By 1933, he had been promoted to the SS equivalent of brigadier-general. The following year he played a significant role in the ‘Night of the Long Knives’ purge of the Sturmabteilung (SA).

By the mid-1930s, Heydrich was established as Himmler’s second in command of the SS. A fanatical and ruthless figure, he was widely feared and disliked by his fellow Nazi officers, some of whom referred to him as the ‘Blonde Beast’.

Documentary evidence places Heydrich at the centre of the Final Solution and its organisation. In January 1939, he took charge of the Reich Central Office for Jewish Emigration in Berlin. After the outbreak of World War II, Heydrich was given command of the Reich Main Security Office (RHSA).

In the latter position, Heydrich established Einsatzgruppen killing squads tasked with rounding up Jews in Nazi-occupied Poland and herding them into ghettos. By 1941, the Einsatzgruppen had become solely focused on extermination. Heydrich drafted or signed several significant Einsatzgruppen orders and attended meetings regarding actions against Jewish peoples.

Heydrich was the most significant figure in attendance at the Wannsee conference in early 1942. He would not live long enough to see the plans at Wannsee implemented, however.

In May 1942, Heydrich was severely injured by a bomb attack while driving through suburban Prague. After appearing as though he might survive, Reinhard Heydrich died from blood poisoning a week later. He had been specifically targeted by the Czechoslovak government and his assassins trained by British commandos.

Outraged by Heydrich’s killing, Hitler and Himmler ordered a wave of recriminations against the Czech people, including summary executions and deportations to concentration camps. More than 1,000 are believed to have died in retaliation for Heydrich’s assassination. The construction of the first Nazi death camps was codenamed ‘Operation Reinhard’ in his honour.