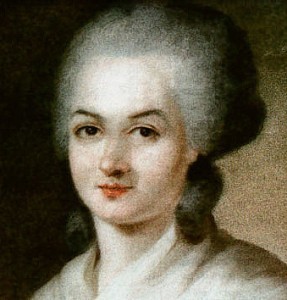 Olympe de Gouges (1755-1793) was a French writer, revolutionary and feminist.

Born Marie Gouze in southern France, de Gouges was the daughter of a semi-literate butcher. Noted for her beauty, at the age of 16 she was forced into an arranged marriage with a much older man. She loathed this situation but escaped from it a year later when her husband died.

In 1770, Gouges moved to Paris and indulged her passions for writing and political discussion, attending several notable salons and mixing with the likes of Jacques Brissot and Marquis Condorcet.

De Gouges’ politics were moderate, reformist and feminist. She supported a constitutional monarchy rather than a republic; she wanted no harm to come to the king; above all, she sought improvements in the rights and conditions of women.

De Gouges is best known for a political pamphlet titled Declaration of the Rights of Woman, a feminist polemic released in September 1791.

She later criticised the National Convention for its failure to lead and facilitate public debate, a move that brought her to the attention of Maximilien Robespierre and the Committee of Public Safety.

Considered an annoyance to the government rather than an explicit threat to the revolution, de Gouges was arrested in July 1793 and sent to trial. She was eventually guillotined in November 1793.