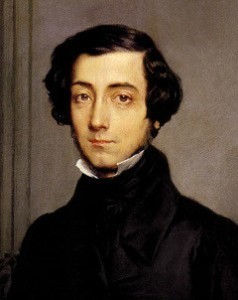 Alexis de Tocqueville was a 19th-century French historian, famous for his claim that the world will more readily accept a “simple lie” than a “complex truth”.

Writing in The Ancien Regime and the French Revolution (1856), Tocqueville adopted a liberal-conservative line, not dissimilar to Simon Schama some 130 years later. He suggests that pre-revolutionary France was a bustling society supported by a modernising economy; he also argues that French monarchs had allowed too much freedom, something that undermined their authority and capacity to govern.

Like other liberal historians, Tocqueville is critical of the aristocracy, who he believed were indolent and purposeless political saboteurs. He sees the events of 1789 not as a response to immediate factors, but a climactic moment that followed a long chain of dissatisfactions, disputes and tensions. “Never before was such an inevitable event so unforeseen”, he wrote of the violence in Paris.

“The Revolution had two distinct phases: one during which the French seemed to want to destroy every remnant of the past, another during which they tried to regain a portion of what they had thrown off. Many of the laws and political usages of the old regime which disappeared in 1789 reappeared some years afterward.”

“While the nobility as an order was losing its political power, men of rank were acquiring new privileges and augmenting their old ones.”

“The middle classes contrived to make strangers and enemies of the lower classes in the cities… The most striking characteristic of the middle classes was their fear of being confounded with the people, and their violent desire to escape from popular control.”

“Englishmen, enlightened by the experience of their own history, and trained by a long enjoyment of political liberty, saw through a thick mist the steady advances of a great revolution; but they could not discern its form, or foresee the influence it was destined to exercise over the world and over their own interests.”

“When the principal sovereigns of Germany proclaimed at Pillnitz in 1791 that all the powers of Europe were menaced by the danger which threatened royalty in France, they said what was true, but at the bottom they were far from thinking so.”

This French Revolution site contains articles, sources and perspectives on events in France between 1781 and 1795. This site is created and maintained by Alpha History. It contains 231,429 words in 354 pages and was updated on January 31st 2021. For more info, visit our FAQ page or Terms of Use.