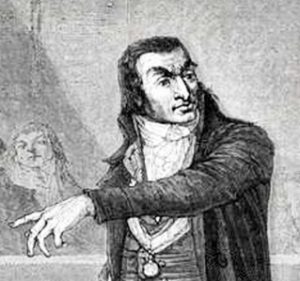 Antoine Fouquier-Tinville (1747-1795) was the notorious chief prosecutor of Paris’ Revolutionary Tribunal, before and during the Reign of Terror.

Born in Picardy, Fouquier-Tinville was a distant cousin of Camille Desmoulins. He studied law and travelled to Paris, where he became an advocate, then a criminal prosecutor.

On Desmoulin’s recommendation, Fouquier-Tinville was recruited for political prosecutions and trials. In March 1793, he was appointed as the chief public prosecutor for Paris. Over the next 14 months, Fouquier-Tinville would send scores to their death. The number sentenced to the guillotine in his court was said to have approached 2,500 and included Marie Antoinette, Olympe de Gouges and his own cousin, Desmoulins.

Fouquier-Tinville’s court hearings were not an attempt to find the truth or prove guilt, it was reported, but simply confirmations of a preordained death sentence, delivered with a legalised flourish.

Fouquier-Tinville was arrested after the fall of Robespierre, put on trial by the Thermidorian reactionaries and executed in May 1795.

Citation information
Title: “Antoine Fouquier-Tinville”
Authors: John Rae, Steve Thompson
Publisher: Alpha History
URL: https://alphahistory.com/frenchrevolution/antoine-fouquier-tinville/
Date published: May 18, 2017
Date accessed: December 02, 2021
Copyright: The content on this page may not be republished without our express permission. For more information on usage, please refer to our Terms of Use.