Walter Ulbricht (1893-1973) was a socialist politician who played a critical role in the development of East Germany. 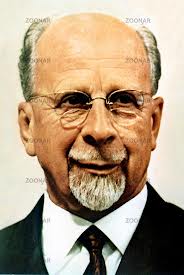 Born in Leipzig, Ulbricht was the child of working-class parents who were active members of the Social Democrat Party (SPD). Ulbricht himself joined the SPD in 1912 while training as a cabinet maker. He was conscripted at the beginning of World War I and served on the Eastern Front until 1917 when he deserted.

After the war, Ulbricht joined the Spartacus League, a communist revolutionary group, and later attended the foundation meeting the Communist Party of Germany (KPD). He also studied socialist politics and government in Moscow.

Ulbricht returned to Germany and served as a politician during the Weimar period, holding a KPD seat in the Reichstag (German parliament) between 1928 and 1933. Ulbricht fled Germany after the Nazis seized power in 1933, living in Paris and Prague before relocating to Moscow.

Ulbricht returned to Berlin in May 1945. He became a pivotal figure in the Democratic Republic of Germany (East Germany) when it was created in 1949. In 1950, Ulbricht became General Secretary of the Socialist Unity Party (Sozialistische Einheitspartei Deutschlands, or SED) and the de facto national leader of East Germany.

Ulbricht’s leadership and policies were largely modelled on those of Stalin. He implemented a five-year economic plan for industrialisation and modernisation, collectivising both agricultural and industrial labour. Ulbricht also created two mass movements: the Freie Deutsche Jugend (Free German Youth) and Demokratischer Frauenbund Deutschlands (German Women’s League); both were socialist in intent but reminded many of Nazi-era organisations. Ulbricht also imposed political controls and expanded both the size and power of the Stasi, the notorious East German secret police.

A cult of personality was also constructed around Ulbricht. He was praised highly in party and government propaganda (“our people are represented by a truly great human being, one honoured by the entire progressive world”, one public servant said of Ulbricht).

Ulbricht’s policies failed to achieve significant improvements, either in economic production or standards of living. Food shortages increased, while the government demanded higher production quotas from its industrial workers. Rising dissatisfaction contributed to a mass uprising in East Berlin (June 1953) and a growing exodus of skilled and professional workers to the West. In mid-1961 Ulbricht decided, with the approval of Soviet leader Nikita Khrushchev, to close East Germany’s borders and erect a gigantic wall in Berlin.

The Berlin Wall, coupled with more economic reforms in 1963 and the rise of Leonid Brezhnev, made Ulbricht unpopular both within his own party and in Moscow. In May 1971 he was retired from the East German leadership, ostensibly for health reasons, and replaced with Erich Honecker. Ulbricht suffered a severe stroke in July 1973 and died the following month, aged 80.