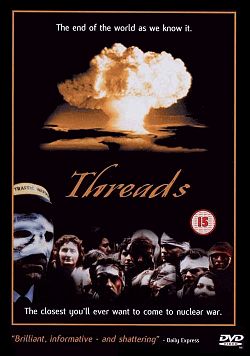 Threads is a British television drama, produced by the British Broadcasting Corporation (BBC) and first broadcast in 1984. It stars Reece Dinsdale as Jimmy Kemp, Karen Meagher as Jimmy’s fiancee Ruth Beckett, David Brierley and Rita May as Mr and Mrs Kemp, and Paul Vaughan as the narrator.

Threads focuses on two families in Sheffield, northern England, as the world heads towards nuclear war. As Jimmy and his pregnant fiancée, Ruth, plan their marriage and other characters go about their usual business, a series of news broadcasts tell of a worsening crisis in the Middle East.

Political instability in Iran has led to a standoff between US and Soviet forces, both on the ground and in the Persian Gulf. Warsaw Pact troops begin to mobilise in East Germany, while Britain also sends troops to the continent. After ignoring a United States ultimatum to withdraw from Iran, the Soviets are attacked by American B-52 bombers. This leads to an exchange of tactical nuclear weapons and further naval clashes.

With war imminent, Britain begins to prepare for a nuclear attack. The city council in Sheffield prepares a bomb shelter and makes plans for coping with a Soviet missile bombardment. Civilians are gripped with fear and engage in looting and rioting, while the authorities arrest and intern peace protestors.

On the morning of May 26th, warning systems indicate incoming Soviet missiles. An electromagnetic pulse destroys electronic and communications equipment across the country. More than 200 megatons of Soviet nuclear weapons are then detonated over significant targets, including military bases and industrial centres. The damage to property is incalculable. Between one quarter and one-third of the population of Britain is killed.

Many Cold War films would end at this catastrophic point, however, Threads goes on to depict the short term and long term aftermath of a nuclear holocaust. Britain suffers from a ‘nuclear winter’ caused by dust and debris suspended in the atmosphere. Food becomes difficult to grow and very scarce. Recovery and reconstruction are both hampered by a lack of manpower. Millions of unburied bodies contribute to outbreaks of diseases like typhoid and cholera.

Ten years after the attack, Britain’s population has fallen significantly. There is a semblance of government but the vast majority of British people live in squalor and suffer from high levels of malnutrition, illiteracy and cancer.

Citation information
Title: “Threads (1984)”
Authors: Jennifer Llewellyn, Steve Thompson
Publisher: Alpha History
URL: https://alphahistory.com/coldwar/threads-1984/
Date published: October 7, 2018
Date accessed: January 20, 2022
Copyright: The content on this page may not be republished without our express permission. For more information on usage, please refer to our Terms of Use.