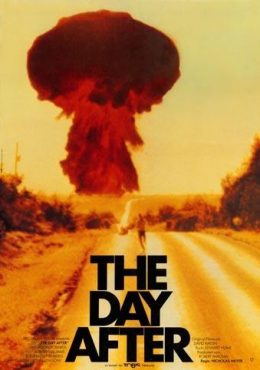 The Day After is an American made-for-television movie, directed by Edward Hume and first broadcast in 1983. It stars Jason Robards as Dr Russell Oakes, JoBeth Williams as Nancy Bauer, Steve Guttenberg as Stephen Klein and John Lithgow as Joe Huxley.

The Day After depicts a hypothetical confrontation between NATO and the Warsaw Pact, which begins with another blockade of Berlin. This confrontation escalates into a full-scale nuclear war that includes a Soviet attack on rural areas of the United States, due to missile silos located there. The film’s main characters are mostly civilians who are affected by this attack. The Day After was controversial and popular, attracting one of the biggest television audiences in history when it screened in 1983.

The film opens by introducing its various characters as they go about their lives. These scenes are interspersed with news reports of Soviet troops being mobilised in East Germany. Television commentators speculate that Moscow is flexing its muscle to force the United States out of West Berlin.

A Soviet blockade of West Berlin follows and the Americans respond by sending NATO troops into East Germany to liberate the city. The conflict spreads into West Germany. As Soviet forces move through West Germany and toward the French border, the Americans attempt to halt their advance with tactical nuclear weapons. This soon escalates into an exchange of nuclear ballistic missiles, though it is not clear who launched these missiles first.

The film’s characters watch these developments, hopeful for a peaceful resolution but fearful of the consequences of a nuclear war. The Day After then depicts nuclear strikes on Kansas and Missouri and the effects on its main characters. Doctor Russell Oakes (Robards), for example, is caught on the freeway during the first attack. Oakes walks to the town of Lawrence and ends up treating the wounded at a small university hospital, most other major hospitals having been destroyed.

The Day After was first broadcast in the US in November 1983. This was preceded by a long publicity campaign, which included warnings about the film’s disturbing themes. Many scenes were cut, censored or changed, some because of their potential effect on viewers.

The film’s initial screening was followed by a live debate on the subject of nuclear weapons, featuring scientists, politicians and military commanders. The Day After terrified millions of people and had a profound impact on attitudes toward nuclear weapons and the Cold War. Many commentators, particularly conservatives, condemned the movie as propaganda designed to advance the cause of disarmament and weaken America’s resolve to maintain its nuclear arsenal.

President Ronald Reagan was given an advance screening of the film, as were his military chiefs. The Day After was also broadcast on Soviet television during the Gorbachev era.

Citation information
Title: “The Day After (1983)”
Authors: Jennifer Llewellyn, Steve Thompson
Publisher: Alpha History
URL: https://alphahistory.com/coldwar/the-day-after-1983/
Date published: October 4, 2018
Date accessed: January 12, 2022
Copyright: The content on this page may not be republished without our express permission. For more information on usage, please refer to our Terms of Use.