Ngo Dinh Diem (1901-63) was the American-backed leader of South Vietnam between 1954 and November 1963. Diem and his regime were notorious for their corruption, rigged elections and persecution of political opponents and religious groups. 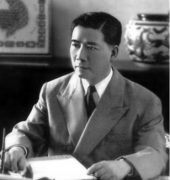 Diem was born in Hue, the imperial capital of Vietnam. His father worked in the palace of the Viet emperor, where he oversaw housekeeping. The family were strict Catholics and affluent by Vietnamese standards. An able student, Ngo Dinh Diem turned down a scholarship in France to study law in the northern city of Hanoi. Diem hoped to obtain a career in the public service but his political activism and support for Vietnamese independence made him unpopular with French colonial officials.

Between 1933 and the mid-1950s Diem was effectively unemployed, spending most of this time on his religion and political activism. During the Japanese occupation of Vietnam Diem’s family was targeted by the nationalist-communist Viet Minh, whose members killed his father and older brother. By 1950 Diem was forced to flee Vietnam. He found his way to the United States, where he lived for the next three years.

Diem returned to Vietnam in mid-1954. Despite being a minor figure, scarcely known in the southern provinces, the Americans chose Diem as their preferred leader of South Vietnam. As future president Lyndon Johnson later noted, Diem was “the only boy we got out there”. Yet some were concerned about Diem’s lack of experience, fanatical Catholicism and his capacity to govern.

Diem’s anti-democratic tendencies were soon exposed when Diem recorded more than 98 per cent of the vote in an October 1954 referendum. In Saigon, Diem recorded more than 600,000 votes, despite the electoral roll containing only 450,000 people. Diem was given to nepotism, appointing family members, close friends and supporters to positions of power or privilege. His regime also imposed strict social reforms, in line with the Diems’ conservative Catholicism. Divorce and abortions were outlawed, for example, and there were crackdowns on prostitution, adultery and opium use (despite Diem’s brother, Ngo Dinh Nhu, being one of the country’s richest opium dealers).

Despite these failures, Western governments continued to support Diem. In 1957 he embarked on a global tour to the United States, Australia and elsewhere. Leaders there hailed Diem as a democrat, a hero for his people and a courageous warrior against communism.

Opposition to Diem in his own country continued to grow, however. In April 1960, a group of Vietnamese intellectuals signed the Caravelle Manifesto, likening Diem’s methods to those used by “dictatorial communist regimes”. These warnings were ignored.

In 1963, Diem’s lieutenants undertook a campaign of violence against Vietnam’s Buddhists, leading to protests, violence and suicides by self-immolation. These developments captured the intention of the world and exposed the cruelties and injustices of the Diem regime.

In August 1963, US president John F. Kennedy withdrew his support for Diem and authorised the Central Intelligence Agency (CIA) to investigate a change of leadership in South Vietnam. This led to a November 1963 military coup in which Diem and his brother were overthrown, arrested and executed.