Muammar Gaddafi or Qadhafi (1942-2011) was a Libyan military officer who seized control of the country in 1969. 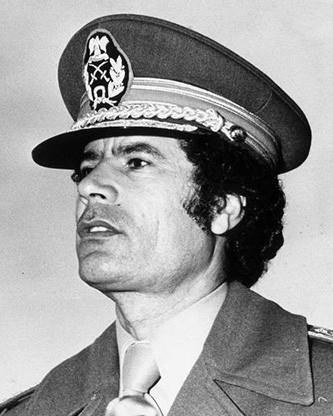 Gaddafi was born in south-western Libya, the youngest child of a Bedouin family. Though his family were nomadic and illiterate, the young Gaddafi was sent to school in the coastal town of Sirte. He read widely and followed events in the Middle East.

Gaddafi was particularly inspired by the nationalist policies of his idol, Egyptian president Gamal Nasser. After completing secondary school Gaddafi enrolled at the University of Libya to study history. Disillusioned with his courses, he dropped out and enlisted in the military academy at Benghazi.

During his military training, Gaddafi joined a clique of young officers who shared his Arab nationalism. Together they plotted to rid Libya of its pro-Western government. Gaddafi himself was posted to Britain for further military training; his experiences there only intensified his nationalism.

On his return home, Gaddafi reconnected with his fellow conspirators. They planned a coup d’etat to overthrow the elderly King Idris, who had aligned Libya with Britain and the United States and allowed the Americans to open an air base near Tripoli.

In September 1969, while Idris was abroad on his summer holidays, Gaddafi and his supporters seized control of the government. They proclaimed a new state called the Libyan Arab Republic, which would be ruled by a revolutionary council.

Gaddafi soon emerged as the dominant figure on this council. He became chairman of the council and commander in chief of the Libyan military, having promoted himself to colonel.

Domestically, Gaddafi implemented what he called ‘Islamic socialism’. He moved to nationalise Libya’s oil production while negotiating better deals for oil exports. This increased revenue was used to undertake social reforms, such as the adoption of a welfare system, state-funded education and healthcare, housing projects and employment programs.

These reforms made Gaddafi popular among his people. Behind the scenes, however, Gaddafi’s squads were ruthless in silencing political opponents and dissidents.

In terms of foreign policy, Gaddafi was chiefly interested in winding back colonial influence in Africa and the Middle East. He played a leading role in the Organisation of African Unity while supporting anti-colonial leaders like Nelson Mandela in South Africa and Robert Mugabe in Zimbabwe.

Gaddafi did business with the Soviet Union in the 1970s, accepting aid, purchasing arms and signing trade deals – however, he was never firmly aligned with Moscow. Gaddafi’s ire was firmly focused on Israel, which he considered an illegitimate state propped up by American aid.

During the 1970s and 1980s, Gaddafi provided covert support to terrorist attacks on US and Israeli targets, such as the murder of Israeli athletes at the Munich Olympics (1972), the bombing of American soldiers at a West German disco (1986) and the bombing of Pan Am Flight 103 over Lockerbie (1988). US president Ronald Reagan ordered an April 1986 attack on Libya in retaliation for Gaddafi’s actions.

Gaddafi ended his support for terrorism and US-Libyan relations slowly improved. The Arab Spring of 2010-11 triggered an anti-Gaddafi uprising in Libya that soon grew into a civil war. Gaddafi himself was captured and killed in October 2011.