Gamal Nasser (1918-1970) was an Egyptian politician who served as president between 1956 and 1970. Nasser was known for his Arab nationalism, his hatred of colonialism and his efforts to shrug off Western influence in the Middle East. 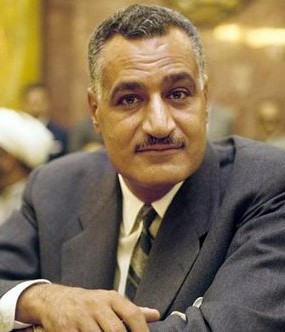 Nasser was born in the Nile town of Beni Mur, the son of a postal clerk. As a boy, he was educated in railway schools and boarding colleges, before attending high school in Cairo. Even as a student Nasser showed antipathy to British colonialism in Egypt. In 1933, he led a student demonstration against British rule while reading histories of nationalist leaders and movements.

Nasser later graduated from the Royal Military Academy and was commissioned in the Egyptian army as a second lieutenant. While at the academy he established a friendship with Anwar Sadat. In the 1940s, Nasser, Sadat and other nationalists established a clique called the Association of Free Officers. Together they plotted to overthrow Egypt’s pro-Western king, Farouk I, and establish a parliamentary democracy.

In July 1952 the Free Officers, led by General Muhammad Naguid and Nasser, initiated their revolution. King Farouk was forced to abdicate before seeking refuge in Europe. The coup leaders established a revolutionary council, abolished the monarchy (June 1953) and sold off Farouk’s palaces and treasures.

Nasser began to accumulate a considerable amount of personal power, elbowing aside Naguib and becoming prime minister (April 1954) and then president (June 1956). Despite his earlier promises of democracy, Nasser reinforced his authority by creating a police state and eliminating his rivals and opponents.

Domestically, Nasser spent heavily to modernise Egypt, investing in infrastructure and public works. He also purchased arms from the Soviet Union, having previously been refused by the United States.

In July 1956 Nasser declared his intentions to nationalise the Suez Canal, a man-made waterway connecting the Red Sea with the Mediterranean. This triggered the Suez Crisis and a joint British, French and Israeli invasion of Egypt. While Nasser was forced to abandon his plans, his actions in the Suez were popular with Arab nationalists.

Nasser continued his domestic program by nationalising dozens of foreign industries based in Egypt. Though Nasser was not a communist, his nationalisation of foreign industries, arms deals with Moscow and attempts to rally Arab nations against the West caused concern in the US. Washington responded by cultivating alliances with other Middle Eastern governments, such as the rulers of Jordan and Saudi Arabia.

Nasser’s leadership served as a model for other Arab nationalist revolutions, such as the Ba’athist uprising in Iraq (1963) and Muammar Gaddafi’s takeover in Libya (1969).

Nasser died of a heart attack in September 1970. He was succeeded by his friend and political ally Anwar Sadat.