Julius Rosenberg (1918-1953) and Ethel Rosenberg (1915-1953) were an American husband and wife convicted of espionage and executed for passing nuclear secrets to Soviet agents. 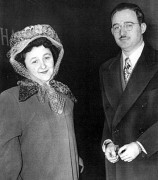 Julius Rosenberg and Ethel Greenglass were both born in New York City to Jewish immigrant families. Rosenberg was a quiet and studious teenager who later obtained a degree in electrical engineering. Greenglass worked briefly as an entertainer before taking a secretarial job at a shipping firm, where she reportedly encouraged other workers to take industrial action.

Rosenberg and Greenglass were both members of the Young Communist League during the 1930s. They met at League meetings, married in 1939 and moved into an apartment in Brooklyn. They later had two children, Michael and Robert.

In 1940, Julius Rosenberg obtained a civilian job with the US Army. He worked as an engineering inspector, a position that occasionally gave him access to secret and sensitive information.

A year or two into his military service Rosenberg was allegedly recruited by an agent from the NKVD, a Soviet police and intelligence agency that was the forerunner to the KGB.

According to the Federal Bureau of Investigation (FBI), Rosenberg began to pass Soviet agents information about weapons systems, designs and testing. His wife Ethel assisted him by typing up copies of stolen documents, while Ethel’s brother David Greenglass – a machine operator working on the Manhattan Project – supplied information about atomic weapons development.

The Rosenbergs came to the attention of the FBI after being named by captured Soviet agents. The Rosenbergs and Greenglass were arrested in 1950 and subject to intense questioning and investigation.

In August, a grand jury indicted them on 11 espionage-related charges. Their trial began in March 1951 and ran for 25 days. David Greenglass was the prosecution’s main witness, while McCarthy supporter Roy Cohn was a member of the prosecution team.

The Rosenbergs were both convicted, despite the case against Ethel being particularly weak. Both were sentenced to die in the electric chair. Some have suggested that Ethel Rosenberg’s death sentence was a ploy, designed to extract a plea for clemency and information from her husband, however, this was not forthcoming.

The Rosenbergs were executed in Sing Sing prison, New York on June 19th 1953. The execution was controversial for several reasons. Ethel Rosenberg’s death was prolonged and torturous: it took five bursts of electricity before she died, puffs of acrid smoke floating above her head.

The Rosenbergs were the only two American civilians executed for espionage during the Cold War.

Citation information
Title: “Julius and Ethel Rosenberg”
Authors: Jennifer Llewellyn, Steve Thompson
Publisher: Alpha History
URL: https://alphahistory.com/coldwar/julius-ethel-rosenberg/
Date published: November 10, 2018
Date accessed: February 02, 2023
Copyright: The content on this page may not be republished without our express permission. For more information on usage, please refer to our Terms of Use.

This Cold War site contains articles, perspectives and sources on global events and tensions between 1945 and 1991. This site is created by Alpha History and contains 314,783 words in 411 pages. It was updated on February 1st, 2023. For more info, visit our FAQ or Terms of Use.