Roy Cohn (1927-1986) was an American lawyer who served as Joseph McCarthy’s right-hand man during the anti-communist witch hunts of the early 1950s. 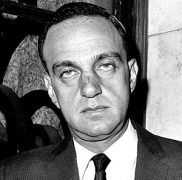 Cohn was born into affluence in New York; his father was a state judge and his mother was from a wealthy banking family. He attended Columbia University, graduating in 1947 and earning admittance to the bar the following year.

Cohn obtained a position with the US Attorney and set about investigating and prosecuting suspected communist leaders. He was also a member of the prosecution team in the controversial espionage case against Julius and Ethel Rosenberg in 1951.

Though only in his early 20s, Cohn acquired a reputation for his intelligent, tenacious and sometimes caustic investigation of suspected communists. In 1952, Cohn served as a special assistant to James McGranery, the United States Attorney General, investigating suspected communist sympathisers among American staff at the United Nations. He also investigated and prosecuted the prominent historian Owen Lattimore.

In 1953, Cohn was recruited as chief prosecutor by Senator Joseph McCarthy. Cohn invited controversy in 1953 when he embarked on a long tour of Europe with his friend and possibly lover, G. David Schine. The purpose of the taxpayer-funded trip was to examine American libraries abroad and remove books containing communist ideas or sympathies.

In 1954, McCarthy and Cohn launched an investigation of alleged communist infiltration of the US Army. Some have claimed that Cohn targeted the Army after Schine was drafted and Cohn was unable to secure him preferential treatment. In any case, Cohn and McCarthy’s attack on the Army backfired: Cohn’s relationship with Schine and McCarthy’s interrogative methods were both exposed on public television.

Discredited by the Army-McCarthy hearings, Cohn resigned from McCarthy’s staff and opened his own law firm in New York City. In private practice, he represented prominent clients, including wealthy businessmen and Mafia dons.

Cohn died from AIDS-related illness in 1986.