Guy Burgess (1911-63) was a British diplomat and intelligence officer who passed secrets to Moscow and later defected to the Soviet Union. 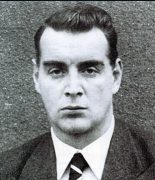 Burgess was born in Plymouth, the son of a loyal and long-serving naval officer. From the age of nine, Burgess attended Lockers Park, a private boarding school in Hertfordshire. He later attended Eton and won a scholarship to read history at Trinity College, Cambridge.

It was at Cambridge where the young Burgess met Anthony Blunt, with whom he would later share a flat. He also associated with other future spies, including Kim Philby and Donald Maclean.

During the early 1930s, Burgess was a brilliant but erratic figure with a wide circle of friends. He was known for his disheveled looks, drunken partying, frequent sexual liaisons with other men and monologues praising the virtues of communism.

Burgess was lured into Soviet service in 1934 by Arnold Deutsch, an Austrian-born communist who recruited several spies. In 1936, Burgess joined the British Broadcasting Corporation (BBC) as a producer. Two years later he joined MI6, the British secret intelligence service.

Burgess began passing information to the Soviets during World War II, while working as secretary to the British foreign minister. In 1947, he was transferred to the British embassy in Washington, where he continued his work as a spy.

Burgess came to the attention of the Federal Bureau of Investigation (FBI), though for his nocturnal activities rather than his espionage. In 1951, Burgess left the US to warn Maclean of his imminent arrest. Burgess and Maclean both vanished, finally reappearing in Moscow in 1956.

Burgess remained in the Soviet Union until his death, probably from alcoholism, in 1963.