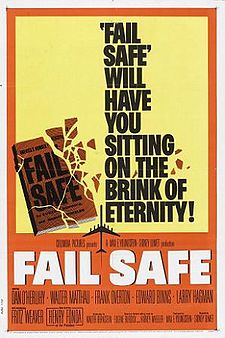 Fail Safe is an American motion picture, directed by Sidney Lumet and released in 1964. It stars Henry Fonda as the United States president, Dan O’Herlihy as US Air Force General Black and Walter Matthau as Professor Groetschele. The film’s script was based on a novel of the same name that was published immediately after the Cuban missile crisis.

Fail Safe explores a common theme in Cold War fiction: the accidental deployment of nuclear weapons by one superpower against another. In this instance, a nuclear attack is launched by the US Air Force in 1967 after an unidentified object triggers warning systems. American bombers carrying nuclear payloads are sent to designated rallying points to await further orders. The cause of the alert is discovered, however, and the bombers are recalled.

One group of American bombers, however, fails to receive the recall order and sets out on its mission to bomb Moscow. As US personnel try frantically to contact the bombers, their communications are jammed by a Soviet defence system. When attempts to contact the bombers fail, American fighter jets are sent to shoot them down, though this also fails.

The US president explains the situation to the Soviet leader, who orders radio jamming to be stopped. The president speaks to the commander of the bomber group and orders him to abort the mission – but the commander, following mission guidelines and procedures, dismisses this as a Soviet trick. When the president realises he cannot stop the bombers from attacking Moscow, he makes a horrific decision in order to avoid a full-scale nuclear exchange.

Fail Safe received excellent reviews from critics, who praised Lumet’s use of light, shadow, sound and camera angles to create a foreboding sense of tension. The movie contains no dramatic background music, relying instead on visual techniques, dialogue and silence pauses.

Fail Safe explores some of the problems inherent in automatic defensive systems. It suggests that nuclear war could be triggered not by rogue generals but by a technical glitch and procedures that remove control from human hands. Fail Safe performed poorly at the box office, possibly because it was released shortly after Dr Strangelove, a film that covered similar territory.

While it lacks the black humour of Dr Strangelove, Fail Safe stands as an effective warning against the doctrine of ‘mutually assured destruction’.