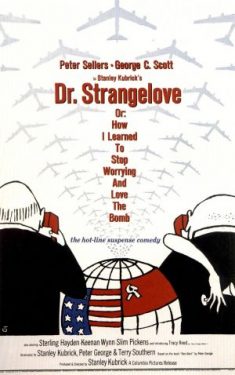 Dr Strangelove, or How I Learned to Stop Worrying and Love the Bomb is an American motion picture, directed by Stanley Kubrick and released in 1964. It stars Peter Sellers in various roles and George C. Scott as General Turgidson.

Dr Strangelove is a satirical commentary on Cold War politics, particularly the polarised relationship between the United States and the Soviet Union, nuclear weapons and the doctrine of ‘mutually assured destruction’. Its plot begins with an American nuclear bombing run over Soviet Russia, launched without authorisation by a rogue Air Force general. The planes fly toward Russia, their communications locked by a security code. US President Merkin Muffley (Sellers) wants to avoid a full-scale nuclear war, so attempts to halt the attack. His chief military advisor, the belligerent General Buck Turgidson, wants the nuclear strike to proceed.

President Muffley contacts the Soviet premier, Kissov, to warn him about the incoming nuclear attack. Muffley learns that the Soviets have a secret ‘Doomsday Machine’, a network of cobalt bombs that would be automatically triggered by an American nuclear attack.

Muffley’s scientific advisor is the eponymous Dr Strangelove, a former Nazi recruited by the US after World War II. Strangelove explains that the cobalt bombs will wipe out all life on Earth and make the planet uninhabitable for almost a century. He also explains the doctrine of nuclear deterrence, observing that “the whole point of the Doomsday Machine is lost if you keep it a secret”. Meanwhile, American paratroopers storm the rogue general’s base and obtain the communications code – but will there be time to call back the planes before they bomb Russia and trigger the Doomsday Machine?

Dr Strangelove was a critical and commercial success, earning high praise and generating several million dollars profit for its producers. It has become one of the best known satirical movies of all time – and certainly the best-known film satire of the Cold War.

Through both narrative and humour, Dr Strangelove explores some of the Cold War’s most problematic issues: the problems within military command structures; the relationship between civilian leaders and military commanders; the effects of arms races; and weaknesses in the doctrine of ‘mutually assured destruction’.

Military chiefs condemned Dr Strangelove for suggesting that a nuclear war could be triggered by officers acting alone. US Air Force boss Curtis LeMay called this “deliberate lies… nothing like that could happen”. It later emerged that some military officers could indeed have launched nuclear weapons without authorisation from the president, validating the warnings in Dr Strangelove.