Curtis LeMay (1906-1990) was an American pilot and United States Air Force general, known as one of the more aggressive military commanders of the Cold War. 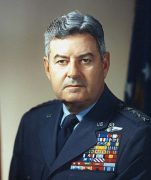 LeMay was born in Columbus, Ohio, the son of an ironworker. As a child, LeMay became fascinated with aeroplanes and was determined to become a pilot. After failing to gain entry to West Point he enrolled at Ohio State University and completed an engineering degree, graduating in 1928.

LeMay enlisted in the US Army Air Corps, completed pilot training in Texas and received a commission in 1929. He spent the next decade training, flying and conducting exercises in various types of aircraft. A disciplinarian and an advocate for using air power whenever possible, he was dubbed ‘Iron Pants LeMay’ by those in his charge.

LeMay served with distinction as a bomber commander during World War II, rising in rank from major to major general in just four years.

In 1942-43, he commanded a bomber group based in England, attacking German targets on the continent. In late 1944, LeMay was put in charge of bombing operations against the Japanese islands. In March 1945, he authorised the mass firebombing of Tokyo, an attack that devastated the city and killed more than 100,000 people.

After the war, LeMay was promoted to lieutenant-general and posted to Europe, where he oversaw the successful airlift that kept West Berlin supplied with food during the East German-Soviet blockade.

In 1948, Curtis LeMay became head of the newly formed Strategic Air Command (SAC), which oversaw the US bomber and missile arsenal during the Cold War. Cigar-smoking and assertive to the point of belligerence, even with those who outranked him, LeMay pushed for increased budget allocations for SAC.

LeMay became chief of the Air Force in 1961. The following year he urged president John F. Kennedy to order the bombing of Soviet missile sites in Cuba, a recommendation that Kennedy rejected.

LeMay retired from the military in 1965. His autobiography, published that same year, revealed LeMay’s belligerence and willingness to use American air power wherever and whenever possible. When discussing how to deal with communists in Vietnam, for example, LeMay suggested “bombing them back to the Stone Age”.

Three years after leaving the military, LeMay became a candidate for the vice presidency, standing as a running mate to Alabama governor and racial segregationist George Wallace. Wallace and LeMay were unsuccessful, winning 13.5 per cent of the vote. LeMay went into retirement thereafter and died in October 1990.