Allen Dulles (1893-1969) was an American lawyer, diplomat and long-serving head of the Central Intelligence Agency (CIA). 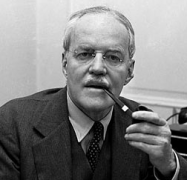 Dulles was born in New York state, the son of a Presbyterian minister and the brother of future Secretary of State John Foster Dulles and diplomat Eleanor Lansing Dulles. Allen Dulles studied at Princeton, graduating with a Master of Arts degree in 1916 before entering the diplomatic corps.

Dulles worked in Europe before and after World War I, representing the United States at the Paris peace conference in 1919. He later served in the Middle East before completing a law degree and joining his brother’s law firm in New York. During the 1930s Dulles worked briefly in Nazi Germany, where he was appalled at the treatment of Jews there.

On the outbreak of World War II, the Roosevelt administration headhunted Dulles to work for the Office of Strategic Services (OSS), the forerunner to the CIA. He spent three years in charge of the OSS office in Switzerland. After the war Dulles became a key figure in the American intelligence service, overseeing the formation of the CIA (1947) then serving as its deputy director.

In 1953, Dulles was appointed as the fifth Director of Central Intelligence, the first civilian to hold that position. Under his nine-year directorship, the CIA both refined and escalated its espionage activities. Among the developments that occurred under Dulles were reconnaissance flights by U-2 spyplanes, the CIA-backed coups in Iran and Guatemala, and intelligence gathering on Castro’s Cuba. Dulles suffered some discredit after the capture of Gary Powers and his U-2 (April 1960) and the failed Bay of Pigs invasion of Cuba (April 1961).

Dulles was forced into retirement by John F. Kennedy. He later served on the Warren Commission that investigated Kennedy’s assassination.