Alger Hiss (1904-1996) was a United States government employee who was convicted and jailed after being accused of spying for the Soviet Union. 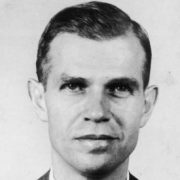 Hiss was born in Baltimore, Maryland. His father was a sales executive who committed suicide when Hiss was just two years old. Hiss was educated at Baltimore High School and Johns Hopkins, before graduating from Harvard with a law degree in 1929.

Hiss worked for the US Justice Department before joining the State Department in 1936. In the mid-1940s, he worked for the Roosevelt and Truman administrations, mainly on international matters. He attended the Yalta conference in early 1945 as a member of the US delegation. In 1945-46 he was instrumental in organising the first sessions of the United Nations.

Named as a spy

In August 1948 a former communist named Whittaker Chambers named Hiss as a member of the Communist Party and accused him of passing secrets to Soviet agents. Hiss then became a target for communist hunters, particularly FBI director J Edgar Hoover and rising congressman Richard Nixon.

In the autumn of 1948, Hiss appeared before the House Un-American Activities Committee (HUAC) and under oath denied ever having been a communist. In 1949, Hiss went on trial for committing perjury before HUAC. This trial, in which the prosecution relied on typed documents, produced a hung jury. He was re-tried in January 1950 and was found guilty, based largely on testimony given by an Austrian-born actress who claimed to have met Hiss in the mid-1930s.

Hiss was convicted and sentenced to five years in prison, though many prominent figures – including Secretary of State Dean Acheson – believed he was innocent.

Hiss’ conviction came just two weeks before Joseph McCarthy’s famous speech in Wheeling and contributed to growing fears that communists had infiltrated the US government. The Hiss case also shone the public spotlight on Richard Nixon, allowing him to become a candidate for the vice presidency in 1952.

Hiss was released from prison in November 1954. Disbarred from the legal profession, he worked as a salesman while making occasional public appearances. He was readmitted to the bar in 1975 and continued to maintain his innocence until his death in November 1996.