Harry Truman (1884-1972) was the 33rd president of the United States, holding office from the final months of World War II until January 1953. 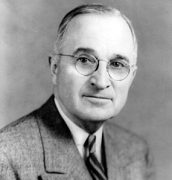 The son of a cattle farmer, Truman was born and raised in rural Missouri. He received a rudimentary education, starting school at age eight and graduating from high school in 1901 (he is the last US president not to have held a college degree). Truman worked on railways and in clerical jobs, before joining the army in 1917. He served as an artillery captain in World War I, seeing extensive combat on the Western Front.

Truman settled in Kansas after the war, later returning to his native Missouri. During the 1920s he ran a clothing store (which went bankrupt), sold automobile club memberships and held several public offices.

In 1934, Truman was elected to the US Senate, where he became known as a dogged and efficient administrator. Truman was selected as president Franklin Roosevelt’s running mate in 1944, a surprising choice given Truman’s low profile.

Truman had been vice president for less than three months when Roosevelt died in April 1945. Despite his inexperience in foreign policy Truman soon proved himself a strong-willed and astute operator. He oversaw the final months of World War II, authorised the detonation of atomic bombs over Japan and negotiated with Soviet leader Joseph Stalin at Potsdam (July 1945).

Unlike his predecessor, Truman was wary of Stalin and reluctant to enter into agreements with him. After World War II Truman moved to contain communist influence around the world, particularly in Europe and Asia. He accepted the policy advice offered by George Kennan in his ‘Long Telegram‘, and became the first US president to accept the Domino Theory of global communist expansion.

In 1947, Truman promised American help for nations resisting communist aggression, particularly Greece and Turkey. This interventionist approach, later referred to as the Truman Doctrine, came to underpin US foreign policy during the Cold War. Truman resolved to maintain the American presence in West Berlin and authorised the Berlin airlift in 1947-48. His administration was also involved in the formation of the North Atlantic Treaty Organisation (NATO).

In Asia, Truman refused to prop up the failing nationalist government in China. When China fell to Mao Zedong, Joseph McCarthy accused Truman and his Secretary of State, George Marshall, of being ‘soft’ of communism and possibly communist sympathisers. rTruman committed American troops to the Korean War, a conflict that intensified both the Cold War and the arms race. Truman’s government also refused to recognise Ho Chi Minh as the leader of Vietnam, preferring to back the return of French colonialists there.

Truman left office in January 1953 and returned to his native state of Missouri. He penned his memoirs but struggled financially in retirement, receiving no pension for either his presidency or service in the Senate. Truman died in 1972, aged 88. His disregard for communism, distrust of Stalin and no-nonsense leadership shaped the first decade of the Cold War.