Thomas Gage (1721-1787) was a general who served as the commander of military forces in North America and the military governor of Massachusetts after the passing of the Coercive Acts. 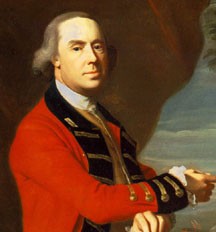 Born in Sussex, Gage was the son of an Irish viscount. A mediocre student, he opted for a military career, joining the British Army in 1741 and exploiting family connections to obtain a lieutenant’s commission. Gage served in the French and Indian War under General Braddock and by 1758 had reached the rank of brigadier-general.

In 1760, Gage was appointed the governor of Montreal. Three years later he became commander-in-chief of British forces in North America, replacing General Amherst.

Gage held this role continuously for 10 years and for most of this time was stationed in New York. Mild-mannered and respected for his service in the French and Indian War, Gage was held in high regard by most Americans.

Gage returned to England in 1773 but by mid-1774, he was back in America with orders to implement and enforce the Coercive Acts. In May 1774 Gage was appointed as military governor of Massachusetts, replacing the unpopular Thomas Hutchinson, who had sought indefinite leave.

The new governor was a popular appointment with Loyalists and even some revolutionaries, who saw him as fair and level-headed. Gage was committed to implementing British policy, however, so he soon came into conflict with the rebels.

In September 1774, Gage and his 4,000-strong regiment began seizing stores of gunpowder in and around Boston, to prevent it falling into the hands of local militias. This action triggered the Powder Alarm and an escalation in colonial military preparations.

Gage became despondent about the worsening situation in America. His reports to London suggested the revolution had spread from Massachusetts to other provinces and that British order could only be restored through the “conquest of New England”. These pessimistic reports contributed to the hardening of British colonial policy in 1774-75.

Gage’s actions during the Powder Alarm saw him become a figure of derision among the colonists, to the extent that his effigy was publicly burned in November 1774.

On April 18th 1775, Gage dispatched a military expedition to disarm rebels and seize munitions in Lexington, north-west of Boston, and to locate and arrest Samuel Adams and John Hancock. The resulting skirmishes precipitated the Battles of Lexington and Concord and the American Revolutionary War.

In June 1775, Gage ordered an assault on rebel positions atop Breed’s Hill in Boston. British troops captured the hill but with heavy casualties (the Battle of Bunker Hill). Criticised for his recklessness, Gage resigned his command and returned to England. He was promoted to full general in 1782 and died in April 1787.