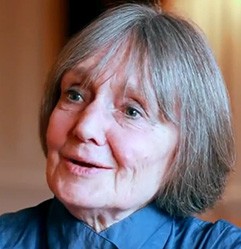 Books: From Resistance to Revolution: Colonial Radicals and the Development of American Opposition to Britain, 1765-1776 (1972), The Old Revolutionaries: Political Lives in the Age of Samuel Adams (1980), American Scripture: Making the Declaration of Independence (1997), Ratification: The People Debate the Constitution, 1787-1788 (2010).

Pauline Maier was one of the most prolific and prominent American historians of her generation.

The daughter of a fireman, she was born Pauline Rubbelke in Minnesota in 1938. Rubbelke was educated at Radcliffe College in Massachusetts; during her studies there she met her future husband, Charles S. Maier, a student and later history professor at Harvard.

Pauline Maier graduated in 1960, studied in London then returned to complete her doctorate at Harvard. Most of her academic career was spent as a professor of history at the neighbouring Massachusetts Institute of Technology.

Maier was a prolific writer who authored dozens of works, from high school textbooks to groundbreaking research. Like her hero Barbara Tuchman, Maier strived to emulate Tuchman’s mastery of narrative, colour and suspense. This made her books popular with both academics and general readers. Maier died from lung cancer in August 2013, aged 75.

Historiographically, Maier has been described as a “truth seeker” who had no obvious ideological agenda, other than explaining and retelling things as they occurred.

A good deal of her work focused on deconstructing myths by going straight to primary sources and building a narrative from there. In 1980, she published a revisionist study of the Boston revolutionary Samuel Adams, painting him not as a political troublemaker but a Puritan conservative who tried to slow down change rather than accelerate it.

In her 1997 book American Scripture: Making the Declaration of Independence, Maier attempted to strip away the ‘sacredness’ of the Declaration by explaining its true origins and purposes. It was not written for moral or philosophical purposes, Maier argues, but as a simple political document, one of many approved by the Continental Congress.

Thomas Jefferson was the author of the Declaration’s words but not its ideas, Maier argues; these ideas came from dozens of similar declarations and resolves that Jefferson simply distilled into one document (she goes as far as calling Jefferson “the most overrated person in American history”).

“Americans took particular pride in being governed under Britain’s unwritten constitution, which they considered the most perfect form of government ever invented by the ‘wit of man’ – a judgement with which, they often added, every major writer on politics agreed.”

“Throughout 1775 ever Congressional petition, address or declaration insisted that despite [British] provocations, the colonists sought a settlement of their differences with the mother country, not independence.”

“In their emphasis on particular events, the news of which had sometimes arrived in the colonies only recently, these documents reveal an American people that was well informed and adopted independence after analysing the implications of specific recent developments.”

“Considering how revered a position the Declaration of Independence won in the hearts and minds of the American people, their disregard for it in the earliest years of the new nation verges on the incredible.”

“My real problem with most studies of the Declaration of Independence is, in fact, less with what they say than what they leave out.”

“The Declaration of Independence was designed first and foremost for domestic consumption.”

“The Declaration of Independence should be understood first and foremost not as a philosophical text but, in the language of the day, as a constitutional document – that is, one that concerned the fundamental authority of government.”

“In the end, considering its complex ancestry and the number of people who actively intervened in defining its text, the Declaration of Independence was the work not of one man, but of many.”

“[Thomas Jefferson] was no Moses receiving the Ten Commandments from the Hand of God, but a man who had to prepare a written text with little time to waste, and who, like others in similar circumstances, drew on earlier documents of his own and other people’s creation, acting within the rhetorical and ethical standards of his time and producing a draft that revealed both splendid artistry and signs of haste.”