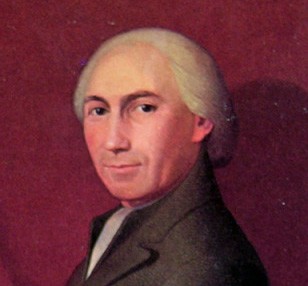 Like William Wirt, Parson Weems was a popular writer rather than a true historian.

He is often cited as the creator of several enduring myths about the American Revolution. Born Mason Lock Weems in Maryland, one of 19 children, after completing school he was sent to England to study theology.

Weems was ordained as an Episcopalian minister and returned to Maryland in 1784. He spent most of his life preaching in Maryland and Virginia. Conflicting reports paint Weems as either an entertaining storyteller or a dull sermoniser enraptured with the sound of his own voice. Whatever the reality, Weems found church appointments difficult to obtain, so he took up work as a bookseller to supplement his income.

Weems also dabbled in writing: his first efforts involved rehashing British Protestant sermons and publishing them under his name. He also penned a series of foreboding moral stories, each with the title “God’s Revenge”.

Weems married and moved to Virginia sometime around 1792. By the time of George Washington’s death in 1799, Weems was living not far from the former president’s ancestral home.

Always seeking opportunities to sell books and promote himself, Weems quickly published A History of the Life and Death, Virtues and Exploits of General George Washington (1800). Though little more than a collection of Washington anecdotes, glued together with Weems’ fawning praise, it proved popular with the public, who lapped it up.

Weems revised this text several times, adding new tales and accounts of Washington’s life and leadership, many obtained from interviews with the late president’s extended family. One revision included the famous story, never proven or corroborated, of young Washington admitting to chopping down his father’s cherry true – evidence, according to Weems, of Washington’s unflinching honesty.

Another Weems story told of Washington being found deep in prayer at Valley Forge. Yet another hinted at Washington’s invincibility, the general fired on in battle 17 times by a Native American yet surviving. Weems’ praise of Washington was so over the top that one contemporary critic called it “fanaticism and absurdity”. Despite this, at least some of Weems’ apocryphal stories are still found in contemporary accounts of Washington and his life.

“Washington is gone. Millions are gasping to read something about him. I am nearly primed and cocked for ’em. Six months ago I set myself to collecting anecdotes of him. My plan… I give his history… then I show his unparalleled rise and elevation were owing to his great virtues.”

“When George was about six years old he was made the wealthy master of a hatchet, of which, like most little boys, he was immoderately fond, and was constantly going about chopping everything that came in his way. One day, in the garden, where he often amused himself hacking his mother’s pea sticks, he unluckily tried the edge of his hatchet on the body of a beautiful young English cherry tree, which he barked so terribly that I don’t believe the tree ever got the better of it. The next morning the old gentleman [Washington’s father], finding out what had befallen his tree… with much warmth asked for the mischievous author… Presently George and his hatchet made their appearance. ‘George’, said his father, ‘do you know who killed that beautiful little cherry tree yonder in the garden?’… Looking at his father with the sweet face of a youth… he bravely cried out, ‘I can’t tell a lie, Pa, you know I can’t tell a lie. I did cut it with my hatchet.”

“It is the private virtues that lay the foundation of all human excellence. Since it was these that exalted Washington to be Columbia’s first and greatest son, be it our first care to present these, in all their lustre, before the admiring eyes of our children.”

“When the children of years to come, hearing his great name re-echoed from every lip, shall say to their fathers, ” What was it that raised Washington to such a height of glory?” let them be told that it was his great talents, constantly guided and guarded by religion.”

“When called by his country in 1775, to lead her freeborn sons against the arms of Britain, what charming modesty, what noble self-distrust, what pious confidence in Heaven, appeared in all his answers.”

“Washington was still more kind and costly in his charities to the minds of the poor. Sensible that a republican government – that is, a government of the people – can never long subsist where the minds of the people are not enlightened, he earnestly recommended it to the citizens of the United States, to promote… institutions for the general diffusion of knowledge. In this, as indeed in all other cases where anything great or good was to be done, Washington led the way.”

“Since the day that God created man on the earth, none ever displayed the power of industry more than did George Washington. Had he, as Prince of Wales or as dauphin of France, rendered such great services or attained such immortal honours, it would not have seemed so marvellous in our eyes.”