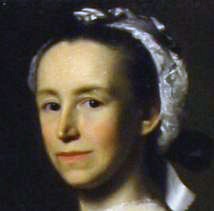 Books: History of the Rise, Progress and Termination of the American Revolution (1805)

Mercy Otis Warren was a poet, playwright, chronicler and one of the American Revolution’s few prominent female voices.

Born Mercy Otis in Cape Cod, Massachusetts, she was the younger sister of James Otis, later famous for inventing the slogan “Taxation without representation is tyranny”.

Otis herself received no formal education but was instead prepared for the domestic life of a genteel woman. Yet Otis lived in a family where education, literature, law and politics were paramount. She sat in on her brothers’ lessons and developed a passion for education, particularly for writing.

In 1754, Mercy Otis married her second cousin, James Warren. He later served as president of the Massachusetts legislature and paymaster of the Continental Army. In the 1770s Mercy Otis Warren was an active contributor to Massachusetts’ Committees of Correspondence. She penned several essays and pamphlets supporting the revolution, though all were published anonymously. Warren also exchanged letters with several prominent revolutionary leaders, including George Washington, Thomas Jefferson and John Adams.

After the Revolutionary War, Warren began to publish plays, satires and political essays in her own name. In 1801, she began collating and rewriting her earlier notes into a comprehensive historical account of the revolution. Warren’s History of the Rise, Progress and Termination of the American Revolution was published in three volumes in 1805.

Historiographically, Warren was a precursor to later Whig historians. She considered the American Revolution a great act of political and philosophical progress, a true manifestation of Enlightenment ideals.

Warren praised the radicals who had brought on the revolution: men like Samuel Adams, Patrick Henry and Jefferson. She was more critical of those she believed had halted it, particularly Alexander Hamilton and John Adams.

Warren was a liberal who placed the protection and advancement of individual rights above all else. She was critical of slavery, arguing that it had no place in the newly-free United States. She also opposed the Constitution, at least initially, believing it failed to protect and guarantee civil rights.

The passing of the Bill of Rights eased Warren’s concerns and she became a cautious supporter of the new republic until her death in 1814.

“The love of domination and an uncontrolled lust of arbitrary power have prevailed among all nations, and perhaps in proportion to the degrees of civilisation. They have been equally conspicuous in the decline of Roman virtue and in the dark pages of British history.”

“The story of political revolution never exhibited a more general enthusiasm in the cause of liberty… The intelligent yeomanry of the country, as well as those educated in higher walks, became convinced that nothing less than a systematic plan of slavery was designed against them.”

“Few of the executive officers employed by the king of Great Britain, and fewer of their adherents, were qualified either by education, principle or inclination to allay the ferment of the times.”

“…At the same time they [American colonists in 1768] expiated on their duty and attachment to the king, and detailed in terms of respect the representations that had been made to his ministers, they expressed the boldest determination to continue a free but a loyal people. Indeed there were few, if any, who indulged an idea of a final separation from Britain at so early a period.”

“America stands armed with resolution and virtue. But she still recoils at the idea of drawing the sword against the nation from whence she derived her origin. Yet Britain, like an unnatural parent, is ready to plunge her dagger into the bosom of her affectionate offspring. But may we not hope for more lenient measures.”

“The British were indeed far superior to the Americans in every respect necessary to military operations, except the revivified courage and resolution, the result of sudden success after despair.”

“Generals Washington and Lee… dined with us (at Watertown) three days since. The first of these I think one of the most amiable and accomplished gentlemen, both in person, mind, and manners, that I have met with. The second, whom I never saw before, I think plain in his person to a degree of ugliness, careless even to impoliteness; his garb ordinary, his voice rough, his manners rather morose; yet sensible, learned, judicious, and penetrating…”

“Our situation is truly delicate and critical. On the one hand, we are in need of a strong federal government founded on principles that will support the prosperity and union of the colonies. On the other, we have struggled for liberty and made costly sacrifices at her shrine and there are still many among us who revere her name too much to relinquish (beyond a certain medium) the rights of man for the dignity of government.”

“The origin of all power is in the people, and they have an incontestable right to check the creatures of their own creation.”

“It is necessary for every American… to stop the dissemination of principles evidently destructive of the cause for which they have bled. It must be the combined virtue of the rulers and of the people to do this, to rescue and save their civil and religious rights from the outstretched arm of tyranny, which may appear under any mode or form of government.”

“A superfluity of wealth and a train of domestic slaves naturally banish a sense of general liberty, and nourish the seeds of the kind of independence that usually terminates in aristocracy.”

“Mankind may amuse themselves with theoretic systems of liberty… but we can only discern its true value by the practical and wretched effects of slavery.”