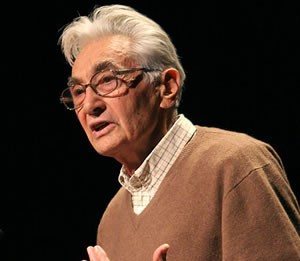 Howard Zinn was one of the most popular yet most divisive American left-wing intellectuals of the late 20th century.

Born in New York City to Jewish-Hungarian migrants, Zinn served as a bombardier with the US Army Air Force during World War II. According to Zinn, his political views were shaped by his experiences in the final weeks of the war. On one occasion his unit was sent to bomb locations with no strategic military value; the raids killed hundreds of civilians and retreating German soldiers.

After the war, Zinn returned to the United States and studied history at New York and Columbia universities. He obtained his doctorate in 1958 and spent the next three decades researching and lecturing at several colleges, most notably Boston University.

Zinn’s best-known text, A People’s History of the United States, was published in 1980. It tells the history of the American nation from colonisation to the Vietnam Wa, from perspectives that are usually ignored by academic historians.

Unlike Whig accounts that explain American history as a march of progress, A People’s History focuses on the mistreatment, exploitation and thwarted aspirations of minorities and the working classes.

Zinn’s view was that traditional American histories were sympathetic to the nation’s social and economic elites. Tragedies caused by war, inequality or economic exploitation are routinely overlooked or trivialised. The transgressions and errors of governments are ignored or explained away. Measures designed to coerce or control the people are portrayed as necessary or benevolent. A People’s History sought to redress this imbalance.

With regard to the American Revolution, Howard Zinn considers it a contrived product of the colonial elites, a series of hostile responses to British policy, trade and taxation that exaggerated the dangers of these things.

The aim of the revolution, Zinn argues, was to divert colonial class anger of the 1760s, shifting it away from colonial assemblies and onto the British government.

In doing this, the revolutionary elite was able to seize control of part of the British Empire and rule it as their own. They convinced ordinary Americans to support them, using manufactured political ideologies, anti-British paranoia and American nationalism. The revolution, its leaders and its core documents – the Declaration of Independence, the Constitution and the Bill of Rights – were later reinvented as sacred artefacts and became immune from criticism or challenge.

According to A People’s History, the Constitution was an advanced means of law, control and coercion, rather than a brilliant gift from benevolent ‘Founding Fathers’.

“It is possible, reading standard histories, to forget half the population of the country. The explorers were men, the landholders and merchants men, the political leaders men, the military figures men.”

“In 1776, certain people in the English colonies made a discovery: they found that by creating a nation, a symbol, a legal unity called the United States, they could take over land, profits and political power from the British Empire. In the process, they could hold back a number of potential rebellions and create a consensus of popular support for the rule of a new, privileged leadership. When we look at the American Revolution in this way, it was a work of genius.”

“The Revolutionary leadership distrusted the mobs of poor. But they knew the Revolution had no appeal to slaves and Indians. They would have to woo the armed white population.”

“It seemed that the majority of white colonists, who had a bit of land, or no property at all, were still better off than slaves or indentured servants or Indians, and could be wooed into the coalition of the Revolution.”

“Here was the traditional device by which those in charge of any social order mobilise and discipline a recalcitrant population, offering the adventure and rewards of military service to get poor people to fight for a cause they may not see clearly as their own.”

“[It was] a wonderfully useful device, the language of liberty and equality which could unite just enough whites to fight a Revolution, without ending either slavery or inequality.”

“Inspirational language is still used, in our time, to cover up serious conflicts of interest in an apparent consensus and to cover up, also, the omission of large parts of the human race.”

“It seems that the rebellion against British rule allowed a certain group of the colonial elite to replace those loyal to England, give some benefits to small landholders, and leave poor white working people and tenant farmers in very much their old situation.”

“One would look, in examining the Revolution’s effect on class relations, at what happened to land confiscated from fleeing Loyalists. It was distributed in such a way as to give a double opportunity to the Revolutionary leaders: to enrich themselves and their friends, and to parcel out some land to small farmers to create a broad base of support for the new government”

“The new constitutions that were drawn up in all states from 1776 to 1780 were not much different from the old ones. Although property qualifications for voting and holding office were lowered in some instances, in Massachusetts they were increased. Only Pennsylvania abolished them totally.”

“The inferior position of blacks, the exclusion of Indians from the new society, the establishment of supremacy for the rich and powerful in the new nation – all this was already settled in the colonies by the time of the Revolution. With the English out of the way, it could now be put on paper, solidified, regularised, made legitimate, by the Constitution of the United States.”

“At the Constitutional Convention, [Alexander] Hamilton suggested a President and Senate chosen for life. The Convention did not take his suggestion. But neither did it provide for popular elections, except in the case of the House of Representatives, where the qualifications were set by the state legislatures (which required property holding for voting in almost all states), and excluded women, Indians and slaves.”

“The Constitution serves the interest of a wealthy elite – it enables the elite to keep control with a minimum of coercion, a maximum of law all made possible by the fanfare of patriotism.”

“The problem of democracy in post-revolutionary society was not the constitutional limitations on voting. It lay deeper, beyond the Constitution, in the division of society into rich and poor. For if some people had great wealth and great influence – if they had the land, the money, the newspapers, the church, the educational system – how could voting, however broad, cut into such power?”