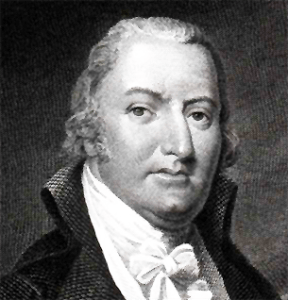 David Ramsay was an 18th century South Carolinian physician and politician. He is perhaps better known as one of the first historians of the American Revolution.

Ramsay was born in Lancaster, Pennsylvania, the son of an Irish immigrant. He was educated at Princeton and the University of Pennsylvania, where he studied medicine under Benjamin Rush.

When the British overran Charleston in 1780 Ramsay was exiled to Florida and imprisoned for a year. He was released in 1782 and returned to sit in the Confederation Congress, occasionally substituting as chairman for John Hancock.

After the revolution, Ramsay returned to the South Carolina assembly, serving as president of its upper house. He also championed medical reforms in the state, including educational standards and regulation for physicians, medical treatment for the poor and improvements to public facilities and hygiene.

Nationally, Ramsay was better known as a historian than a physician or legislator. An eager writer in his spare time, he penned a local history of the revolution in South Carolina in 1785. Four years later, Ramsay published a two-volume work, The History of the American Revolution, with more of a national focus. It was one of the first serious histories of the revolution and was very popular in its time.

Historiographically, Ramsay was a nationalist and a moderate Whig. He saw the revolution as an inevitable product of the Anglo-American relationship; it was brought about by factors like the vast distances between Britain and America, the ‘salutary neglect’ of British imperial policy, dissenting Protestantism in the 13 colonies, a literate and politically involved colonial population, and an acute awareness among colonists of their civil and natural rights.

Ramsay’s view of post-revolutionary America was largely Federalist. He voiced criticism of local and state governments and support for the United States Constitution – but he was also sharply critical of slavery and those who relied upon it.

Ramsay died prematurely in May 1815, murdered by a former patient who gunned him down in the street.

“The English colonies participated in that excellent form of government with which their parent isle was blessed, and which had raised it to an admirable height of agriculture, commerce and manufactures.”

“Neither ancient nor modern history can produce an example of colonies governed with equal wisdom or flourishing with equal rapidity.”

“After many struggles, it had been acknowledged to be essential to the constitution of Great Britain that the people could not be compelled to pay any taxes… but such as had been granted or enacted with the consent of themselves or their representatives.”

“[The American colonists] eminently contributed to the prosperity of the English provinces. Others, besides cooperating to the same end, produced a warm love for liberty, a high sense of the rights of human nature, and a predilection for independence.”

“The English colonists were, from their first settlement in America, devoted to liberty, on English ideas and English principles. They not only conceived themselves to inherit the privileges of Englishmen but, though in a colonial situation, actually possessed them.”

“The distance of America from Great Britain generated ideas in the minds of colonists favourable to liberty. Three thousand miles of ocean separated them from the mother country. Seas rolled, and months passed, between orders and their execution. In large governments, the circulation of power is enfeebled [weakened] at the extremities. This results from the nature of things and is the eternal law of extensive or detached empire.”

“The study of law [in colonial America] was common and fashionable. The infinity of disputes in a new and free country made it lucrative and multiplied its followers. No order of men has, in all ages, been more favourable to liberty than lawyers.”

“The United States, from the want of power in their common head, were incapacitated from acting in concert, so as to avail themselves of their natural advantages. [The Confederation] Congress called once more upon the States to enlarge their powers, and particularly to entrust them with the regulation of commerce… Some states fully complied with this call but others fettered their grants which prevented the formation of a uniform system.”

“Individuals who had a great influence in state legislatures, or who held profitable places under them, were unwilling to adopt a government which, by diminishing the power of the states, would eventually diminish their own importance.”

“A new Congress, with more ample powers and a new constitution, partly national and partly federal, succeeded in their place to the great joy of all who wished for the happiness of the United States.”