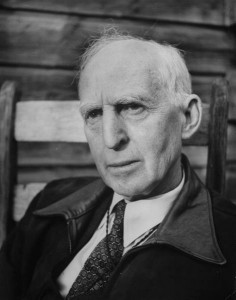 Books: An Economic Interpretation of the Constitution (1913)

Charles Beard was an American historian active in the decades prior to World War II.

The son of a farmer, Beard was born and educated in rural Indiana. He obtained a bachelor’s degree in his home state before studying at Oxford and Columbia University, earning his doctorate in 1904.

After this, Beard worked as an independent historian, living on the royalties of his books. His wife, Mary Ritter Beard, was also an active historian and a supporter of the women’s suffrage movement.

Beard published An Economic Interpretation of the Constitution in 1913, while still in residence at Columbia. It became his best known and most controversial work.

Bypassing the hero worship of the Founding Fathers common in other histories, Beard sought to understand the United States Constitution by examining the lives and backgrounds of every man who contributed to its creation. He concluded that the drafters of the constitution were men of a distinct elite class, therefore their actions and ideas reflected both their economic worldview and their own self-interest.

Beard did not go as far as suggesting the Constitution was a ‘counter-revolution’ or an elitist conspiracy, as subsequent historians like Howard Zinn have done – but he claimed the ideas and motives of the Constitutional Convention were shaped by the economic situation of its individual members.

In addition, Beard claimed the Constitution was ratified by fewer than one-sixth of all adult males, with large numbers excluded from voting by property qualifications.

Beard’s progressive interpretation of the Constitution was radical for its time. It contradicted the Whig consensus that the Founding Fathers were brilliant and benevolent political leaders, who gave their time and talents to craft an innovative new system for the public good.

Unsurprisingly, Beard was subjected to criticism and vitriol for his revisionism. One writer called him “the mightiest muckraker of them all.

Beard defended his work by reminding critics that economics was not the only factor in the creation of the Constitution. He responded that he was not criticising the Constitution or the capitalist system, nor was he condemning the Founding Fathers as greedy conspirators. By acting in accordance with their own interests, he argued, the drafters of the Constitution were also acting in the national interest (in Beard’s words, “the bee fertilises the flower it robs”).

“The hypothesis that economic elements are the chief factors in the development of political institutions has been used in one or two serious works… but not been applied to the study of American history at large.”

“Large and important groups of economic interests were adversely affected by the system of government under the Articles of Confederation – namely those of public securities, shipping and manufacturing, money at interest – in short capital, as opposed to land.”

“Not one member [of the Constitutional Convention] represented the small farming or mechanic classes. The overwhelming majority of members were, to a greater or less extent, economic beneficiaries from the adoption of the Constitution.”

“Most of our history has been written by Federalists [so] great care should be taken in accepting, without reserve, the gloomy pictures [they paint] of the social conditions prevailing under the Articles of Confederation.”

“The movement for the Constitution of the United States was originated and carried through principally by four groups of personalty [property] interests which had been adversely affected under the Articles of Confederation: money, public securities, manufactures, and trade and shipping.”

“The members of the Philadelphia Convention which drafted the Constitution were, with a few exceptions, immediately, directly and personally interested in, and derived economic advantages from, the establishment of a new system.”

“The Constitution was essentially an economic document based upon the concept that the fundamental private rights of property are anterior [in front of] government and morally beyond the reach of popular majorities.”

“The Constitution was not created by the ‘whole people’, as the jurists have said… but it was the work of a consolidated group whose interests knew no state boundaries and were truly national in scope.”

“The leaders who supported the Constitution in the ratifying conventions represented the same economic groups as the members of the Philadelphia Convention.”