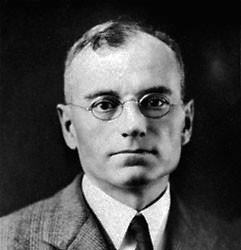 Carl Becker was a historian of the early 1900s who specialised in American history, particularly the 18th century.

Becker was born in rural Iowa and completed his first degree at the University of Wisconsin (1896). He later took postgraduate courses at Columbia, where he studied under Charles Beard. Becker returned to Wisconsin for his doctorate, which he completed in 1907; his thesis was a study of political parties in New York on the eve of the revolution.

In terms of historiography, Becker is generally categorised as the last of the Progressive school.

Early in his career, Becker suggested that the American Revolution was driven by two significant challenges: the question of “home rule” (whether or not America should be independent) and the question of “who should rule at home” (internal struggles for democracy).

Becker’s doctoral thesis placed more emphasis on the second of these. He asserts that American revolutionary sentiment was fuelled by class grievances and a desire for equality, more than concerns about British rule.

The colonial elite, Becker argues, wanted to consolidate their political power without changing the political system. The colonial merchants he describes as “sunshine patriots”, whose politics reflected their economic self-interest. To resist British policy, both the colonial elites and merchant class had to harness the support of the common people, who sought more radical and democratic change.

“The average Briton… had known that England possessed colonies and had understood that colonies existed to supply him with sugar and rice, indigo and tobacco, and in return to buy at a good price whatever he might himself wish to sell. Beyond all this he had given [little] attention to the matter of colonies…”

“Now that his attention was called to the matter, it seemed to the average Briton that… in dealing with this far-flung empire, a policy of efficiency such as advocated by Mr Grenville might well replace a policy of salutary neglect. And if the national debt had doubled during the war, as he was authoritatively assured, why indeed should not the Americans, grown rich under the fostering care of England and lately freed from the menace of France by the force of British arms, be expected… to contribute their fair share to the defence…?”

“Grenville was well content with the form of the colonial governments… In Grenville’s opinion, the Massachusetts government was good enough, and all the trouble arose from the inattention of royal officials to their manifest duties… Most men in England agreed that such pleasant customs had been tolerated long enough. To their suppression, the minister accordingly gave his best attention.”

“The problem of colonial defence, so closely connected with the question of revenue, was none of Grenville’s making – but was a legacy of the war and of that peace of Paris, which had added an immense territory to the Empire.”

“We find in the Declaration of Independence a list or catalogue of acts, attributed to the King of Great Britain, and alleged to have been done by him with the deliberate purpose of establishing over the colonies ‘an absolute tyranny’. These ’causes’ which the Declaration sets forth are not quite the same as those which a careful student of history… would set forth.”

“Of the rivalry between conservative and radical, which the question of the new government gave rise to, we hear but little. Under the stress of military invasion and loyalist conspiracy, all internal dissensions were largely hushed up. Yet although the conservatives were successful in securing a government measurably centralised and measurably aristocratic, we know that there was considerable pressure for a more democratic form.”