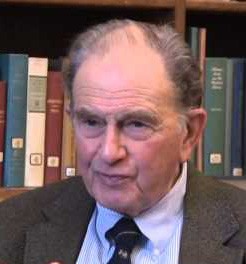 Books: The New England Merchants in the Seventeenth Century (1955), Education in the Forming of American Society (1960), The Ideological Origins of the American Revolution (1967), The Origins of American Politics (1968), The Ordeal of Thomas Hutchinson (1974), The Peopling of British North America (1986), Faces of Revolution: Personalities and Themes in the Struggle for American Independence (1990), To Begin the World Anew: the Genius and Ambiguities of the American Founders (2003).

Bernard Bailyn is an American historian and one of the world’s foremost experts on the American Revolution.

Born in Connecticut, Bailyn served with the United States Army during World War II. He completed a bachelor’s degree at Williams College and began postgraduate studies at Harvard in 1946, earning his doctorate there in 1953. Bailyn then joined the staff at Harvard as an instructor, earning a full professorship in 1961.

During his tenure at Harvard, Bailyn taught and mentored several students who later rose to prominence as historians, including Gordon Wood, Pauline Maier and Mary Beth Norton.

Bailyn retired from Harvard in 1991, however, he has continued to research, write and publish prolifically, even in his 90s. He has served as president of the American Historical Association and has been awarded three Pulitzer Prizes for History (1968, 1987 and 2013).

Bailyn is a prolific writer who focuses on colonial, revolutionary and early republican America. His best-known contribution to our understanding of the revolution is his 1967 book The Ideological Origins of the American Revolution, a study of political pamphlets and their creators.

While Progressive and Conservative historians often overlooked these pamphlets and their creators, Bailyn places them at the centre of revolutionary thought. American revolutionary ideas, he argues, were an extension of British Whig ideas of the 17th and 18th centuries. This Whiggism was focused on protecting individual rights from government overreach and abuses.

Ideological Origins was a groundbreaking work that caused a shift in perceptions of the American Revolution. It showed that the American Revolution, rather than developing in isolation from England, was in fact driven by English Whig ideology. It also challenged existing views about the revolutionaries, rejecting arguments that they acted from self-interest (the Progressive view) or were upholding the status quo (the Conservative view).

For Bailyn, the American revolutionaries were political visionaries, while the revolution was driven by a “transforming libertarian radicalism”.

“The writings of this early period [of the American Revolution] would flow through all subsequent stages of American political thought and provide the permanent foundation of the nation’s political beliefs.”

“Whatever deficiencies the leaders of the American Revolution may have had, reticence, fortunately, was not one of them. They wrote easily and amply and turned out in the space of scarcely a decade and a half… a rich literature of theory, argument, opinion and polemic.”

“For the revolutionary generation… the pamphlet had peculiar virtues as a medium of communication. Then, as now, it was seen that the pamphlet allowed one to do things that were not possible in any other form… One has complete freedom of expression, including, if one chooses, the freedom to be scurrilous, abusive and seditious.”

“The Stamp Act touched off a heavy flurry of pamphleteering in which basic American positions in constitutional theory were staked out; is repeal was celebrated by the publication of at least 11 thanksgiving sermons, all of them crowded with political theory. The Townshend duties led to another intense burst of pamphleteering, as did the Boston Massacre.”

“The originality of these discussions of the nature of government and the uses of power was self-intensifying. Thinkers at each stage, impelled by a spirit at once quizzically pragmatic and loftily idealistic, build upon the conclusions of their predecessors and grasped implications only vaguely sensed before. The movement of thought was rapid, irreversible and irresistible. It swept past boundaries few had set out to cross, into regions few had wished to enter.”

“The ultimate origins of this distinctive ideological strain lay in the radical social and political thought of the English Civil War and of the Commonwealth period; but its permanent form had been acquired at the turn of the 17th century and in the early 18th century.”

“[The constitutional drafters] did not work from clean slates. Constrained by institutions that had long existed, and by entrenched leadership groups, they were revisers, amenders, elaborators and conceptualisers, as they applied fresh ideas to existing structures and brought them as close as possible to their ideal.”

“The American Constitution is the final and climactic expression of the ideology of the American Revolution.”

“The contrast between what political leaders in the colonies sought for themselves and what they imposed on, or at least tolerated in [slavery], became too glaring to be ignored… The identification between the cause of the colonies and the cause of the Negroes bound in chattel slavery – an identification built into the very language of politics – became inescapable.”