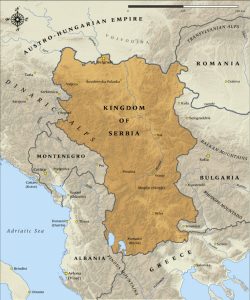 Serbia was by no means a great European power, however, unfolding events placed her at the epicentre of European tensions and the road to World War I.

Sandwiched between Austria-Hungary, the Ottoman Empire and several other Balkan states, Serbia occupied a position of some strategic importance. The Serbian people had a long and rich history but, like Germany and Italy, they did not become an independent nation until the late 19th century.

For centuries, Serbia’s proximity to both Europe and Asia made it a target for invaders. The Romans occupied the region in the 2nd century BC and occupied it for centuries. No less than 17 Roman emperors, including Constantine the Great, were born on Serbian soil.

Slavic Serbs (also known as White Serbs) gradually took control of the region during the Middle Ages. The powerful Ottoman Empire made inroads into Serbia during the 14th century and eventually conquered it in 1459.

The region remained under Ottoman control for three and a half centuries, until the successful Serbian Revolution of the early 1800s. Serbia became a self-governing principality in 1830 and an independent and internationally recognised nation-state in 1878.

The newly independent Serbia was subject to many pressures and influences. These came from its neighbour Austria, from its Slavic cousins in Russia, from Western liberal ideas and from groups within that preached an intense form of nationalism.

The kingdom’s first years were also riddled with intrigue, instability, political rivalry and a failed war with Bulgaria. Its first king, Milan Obrenovic, was pro-Austrian and aligned his country with Vienna, encouraging and facilitating Austrian trade and investment in Serbia.

By the 1880s Serbia had become economically dependent on Austria, while many considered the Serbian king to be politically obedient, if not a puppet of Vienna. This situation displeased Serbian intellectuals, many of whom were sympathetic to Russia and fearful of the consequences of Austrian expansionism.

At first, the newly independent Serbian nation was ruled by the Obrenovic dynasty. Most Obrenovic kings were politically conniving but pleasure seeking, lazy and disinterested in progress.

In the 1880s, King Milan was plagued by criticism, both about his management of the country and his personal life. This criticism contributed to his abdication in 1889, when Milan handed the throne to his young son Alexander.

Four years later, Alexander, probably acting on his father’s instructions, dismissed his ministers and asserted autocratic rule over Serbia. Alexander’s erratic behaviour, along with an unpopular marriage to a much older woman, soon made him even more unpopular than his father.

In May 1903, the 26-year-old king was captured, shot and gutted by a clique of army officers, his body thrown onto a compost heap. The army handed the Serbian throne to Peter, a prince from the rival Karageorgevic dynasty.

Educated in Paris and a veteran of the Franco-Prussian War, the newly crowned King Peter was more Westernised than his predecessors. He was also more practical and hard-working, more interested in modernisation than monarchy.

The new king set about transforming Serbia into a constitutional, democratic state and a modern economy. Immediately after being handed power, the new king enacted a liberal constitution (1903), passed a political amnesty, relaxed suppressive laws and abolished press censorship.

This political liberalisation proved enormously popular, not just with native Serbians but with other Slavic peoples in the Balkans. Many Slavs came to see Serbia as a safe harbour for Slavic identity and culture.

The Greater Serbia movement called for the reclamation of Serbian territory from the Ottoman and Austro-Hungarian empires.

Pan-Slavism, as the movement was also known, called for the liberation of millions of Slavs still trapped under Austrian rule. Some even believed Serbia should form the nucleus of a future Yugoslavia, a single nation for all the Slavic peoples of southern Europe.

The changes in Serbia presented several problems for Austria-Hungary. The Dual Monarchy was used to steering policy in Serbia but this situation came under threat in the first years of the 1900s.

King Peter moved to realign Serbia’s foreign policy, steering his country away from Austrian control and brokering good relations and trade deals with France, Russia and Bulgaria. After two decades as an Austro-Hungarian satellite, Serbia to trade freely and with whomever it chose.

This angered Austrian ministers, who in 1906 initiated trade sanctions, banning future purchases of Serbian pork (one of its main exports). The ‘Pig War’, as it became known, lasted three years but was a victory for Serbia, whose economy diversified and grew rapidly during this time.

With economic independence from Austria-Hungary came a mood for greater political independence. Serbian nationalism intensified and calls for Slavic liberation and unity increased. Even Serbia’s King Peter expressed quite support for a Slavic super state in the Balkans, with Serbia as its beating heart.

Tensions between Vienna and Belgrade were further poisoned by the Bosnian crisis (1908-9) and the Balkan Wars (1912-13).

This move outraged Serbia, who saw the annexation as both an expansion of Austrian power and a threat to Slavic independence in the Balkans. Serbia mobilised its military in response to the annexation, however, they later backed down after failing to secure Russian backing.

Serbia’s military victories in the Balkan Wars – first over the Ottoman Empire, then against its former ally Bulgaria – caused the balance of power to shift again. The Treaties of London and Bucharest saw Serbia gain a considerable amount of territory and people, almost doubling in size (from 48,300 to 87,000 square kilometres) and growing by 1.6 million people.

This expansion made Serbia one of the largest states in southern Europe, as well as the most militarily powerful nation in the Balkans.

By now, Serbian and Austro-Hungarian relations were at a dangerously low ebb. The Austrians viewed Serbia as a nation of troublemakers whose actions might destabilise its fragile empire.

Military planners in Vienna spoke openly about crushing its insolent neighbour. For hardliners, the only task was to find a pretext for war against Serbia, so that it could be brought to heel.

In Serbia, many believed their nation’s interests, as well as the welfare of Slavic people in southern Europe, were being threatened by an expansionist, imperialist power.

Within Serbia, pan-Slavic nationalist groups began to form and flourish. These groups had two aims: to protect the rights of Slavic people in the region and, in the longer term, to drive Austria-Hungary out of the Balkans.

These groups used propaganda and agitation to promote pan-Slavism and condemn its enemies – not just Austria-Hungary but also moderate Serbian politicians who they believe had failed to stand up to Vienna.

Groups like the People’s Defence (Narodna Odbrana), the Black Hand (Crna Ruka) and Young Bosna (Mlada Bosna) adopted a more violent approach. Though comprised mostly of students and young radicals, these militant groups enjoyed some support from Serbian bureaucrats, military officers and even members of the royal family.

In June 1914, a handful of Black Hand members assassinated Archduke Franz Ferdinand in Sarajevo. It was this event that tipped Europe into a catastrophic war.

A historian’s view:
“So long as Bosnia and Herzegovina had remained under supposedly ‘temporary’ military occupation by Austria-Hungary, Serb nationalists could still entertain serious hopes [about the formation of] a ‘Greater Serbia’, encompassing Bosnia and Herzegovina as well as Macedonia, Kosovo and possibly Dalmatia, giving them unimpeded access to the sea. The formal annexation of Bosnia and Herzegovina [in 1908] was intended to extinguish such hopes and to force Serbia to accept a permanently landlocked and semi-dependent status.”
Robert Bideleux

1. Serbia was a Balkan nation sandwiched between Austria-Hungary and other states previously controlled by the Ottoman Empire.

2. It gained national independence from the Ottomans in the 1800s but came under the political and economic control of Austria.

3. Under King Peter I, who took the throne 1903, the Serbian nation modernised and liberalised, underwent economic growth and started to shed itself of Austrian control.

4. Serbia also became a harbour for nationalism and pan-Slavism, a movement that antagonised Austro-Hungarian leaders.

5. Tensions with Austria-Hungary contributed to the rise of several Serbian nationalist groups. These groups aimed to defend Serbia from Austrian encroachment and protect the rights of Slavic people.

Title: “Serbia before World War I”
Authors: Jennifer Llewellyn, Steve Thompson
Publisher: Alpha History
URL: https://alphahistory.com/worldwar1/serbia/
Date published: August 3, 2017
Date accessed: August 13, 2022
Copyright: The content on this page may not be republished without our express permission. For more information on usage, please refer to our Terms of Use.