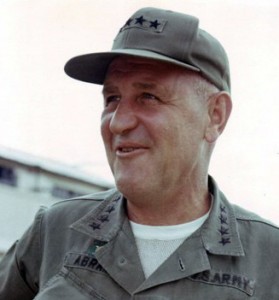 Creighton Abrams (1914-1974) was a US Army general who served as commander of Military Assistance Command, Vietnam (MACV) and later as Army chief of staff.

Abrams was born into a working-class family from Agawam, rural Massachusetts. He attended the military academy at West Point, graduating in 1936. During World War II Abrams was in charge of a tank battalion. In this role, he earned a reputation as an aggressive and resourceful commander.

By 1945, Abrams had reached the rank of colonel, twice winning the Distinguished Service Cross and earning high praise from General George Patton and others. After the war, he held several command and training positions in the United States and West Germany.

The escalation of the Vietnam crisis in late 1964 saw Abrams recalled from Europe and promoted to full general. He was appointed deputy chief of staff for the Army and was largely responsible for organising the deployment of American military personnel to South Vietnam.

In May 1967 Abrams was himself posted to Vietnam, in the role of General William Westmoreland’s deputy at MACV. In this position he worked closely with the South Vietnamese Army (ARVN), providing advice and support with recruiting, training and organisation.

A positive character who understood the challenges of leadership and the needs of soldiers, Abrams made significant progress. His leadership helped the ramshackle ARVN become a more effective military force, an improvement noticeable during the Tet Offensive (January 1968). In June 1968, Westmoreland was recalled to Washington and Abrams was placed in command of MACV.

Under Abrams, numbers of American troops in Indochina gradually decreased. By the time he resigned from MACV in 1972, there was fewer than 50,000 American military personnel remaining in Vietnam.

Most historians assess Abrams as an intelligent and highly skilled commander who was alert to the political complexities and strategic difficulties in Vietnam. The New York correspondent Robert Shaplen once said of Abrams that he “deserved a better war”. Abrams succumbed to cancer in September 1974, two years after leaving Vietnam.