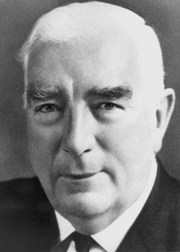 Robert Menzies (1894-1978) was prime minister of Australia twice, during the first years of World War II and again between December 1949 and January 1966.

Menzies was born into a middle-class family in Jeparit in rural Victoria. He was educated at private schools in Ballarat and Melbourne, then completed a law degree at Melbourne University. Unlike many young men of his generation, Menzies chose not to enlist for service in World War I.

In April 1939, Menzies became prime minister, after the death of the incumbent, Joseph Lyons. He did not enjoy the full support of his party, however, and was eventually forced to resign in August 1941.

Menzies returned to power in December 1949, after the emerging Cold War pushed Australian politics to the right. He was a political conservative who favoured traditional values, such as loyalty to Britain. Menzies was also paranoid about communism, both within Australia and in the Asian sphere.

In 1951, Menzies attempted to ban the Communist Party of Australia, a move that was thwarted by the High Court and a public referendum. His government sent almost 2,300 Australian troops to the Korean War (1950-53) and later supported American military involvement.

According to Menzies and his ministers, the expansion of communism into South Vietnam posed a direct threat to Australia and her interests. Menzies met with United States president John F. Kennedy in 1962 and offered to support the South Vietnamese Army (ARVN) with arms, ammunition and a small team of Australian advisors.

In late 1964, Menzies announced significant increases in Australia’s military assets, to be filled by conscription into a program of National Service. In April 1965, Menzies responded to American and South Vietnamese requests for direct Australian involvement, sending a full battalion to Vietnam.

Menzies’ decision to send Australian troops to Vietnam was a controversial one. It was just four days after the 50th anniversary of the failed ANZAC landings in Gallipoli, without the agreement of Australia’s opposition Labor Party and without much public debate. Around 59,000 Australian soldiers would eventually serve in Vietnam and 508 were killed.

Menzies did not have to deal with the consequences of his decision, retiring from politics nine months later. He later suffered a series of strokes that left him physically disabled. Menzies was knighted in 1977 and died the following year, aged 83.