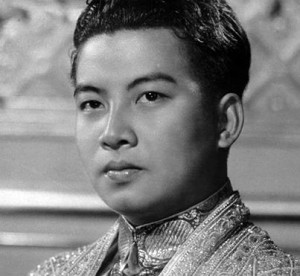 Norodom Sihanouk (1922-2012) was a pivotal figure in Cambodia during and after the Vietnam War. At various times he served as Cambodia’s king, head of state and elected prime minister.

A descendant of the Angkor emperors, Sihanouk was born Prince Norodom in Phnom Penh in October 1922. Like others of the Indochinese elite, he received a French education, first in Phnom Penh and later in Saigon and Paris.

Sihanouk became king in 1941 after the death of his grandfather King Monivong. The French colonial regime believed that Sihanouk, like his predecessors, would be easy to manipulate. Instead, he proved a cunning political operator who facilitated greater autonomy and set Cambodia on the path to independence.

Sihanouk was an intelligent and charismatic figure given to egotism, high living and womanising. He was fond of Western culture, particularly film and music, and occasionally sang Elvis Presley ballads at state dinners.

Sihanouk wanted a free and independent Cambodia. He was a political progressive who sought social and economic reforms to benefit his people. Under Sihanouk’s leadership, Cambodia was granted independence from France in 1953. In 1955, Sihanouk took the unprecedented step of abdicating the throne and standing for election as the country’s prime minister. Sihanouk won this election comfortably, a measure of his enormous popularity with the Cambodian people.

As the nation’s democratic leader, Sihanouk decided that his first priority was to keep Cambodia at peace and prevent it from being drawn into the quagmire of Cold War politics and conflict.

Sihanouk’s attempts to maintain peace were thwarted by the activities of the Viet Cong and North Vietnamese Army (NVA), both of whom used Cambodia’s eastern provinces for training, respite and supply dumps. This focused American attention on Cambodia and its leader.

Sihanouk had a problematic relationship with the United States. Washington had given only lukewarm support to Cambodian independence. Between 1955 and 1963 Cambodia received almost $US500 million in US economic and military aid, while the CIA actively supported Sihanouk’s rivals. Fed up with American pressure and meddling, Sihanouk refused further American aid in late 1963, and in April 1965 he cut diplomatic ties with Washington. This move caused friction between Sihanouk and Cambodia’s conservatives, particularly General Lon Nol, a pro-Western military commander.

In March 1970, while Sihanouk was visiting China, Lon Nol seized control of the Cambodian government. From exile, Sihanouk called on Cambodians to resist the US-backed military coup. He returned to Cambodia after the Khmer Rouge victory in April 1975. Sihanouk became a captive figurehead under the Khmer Rouge. He remained under virtual house arrest in his Phnom Penh quarters, while many of his family members were executed by the Khmer Rouge.

When Vietnamese forces invaded in 1979, Sihanouk was again forced into a much longer exile, living for more than a decade in China and North Korea. He returned to Cambodia in 1991 and was restored as king and head of state in 1993. Sihanouk’s son, Norodom Ranariddh, also served as prime minister of Cambodia during the 1990s.

Sihanouk abdicated and retired from official duties in 2004 and died eight years later.

Citation information
Title: “Norodom Sihanouk”
Authors: Jennifer Llewellyn, Jim Southey, Steve Thompson
Publisher: Alpha History
URL: https://alphahistory.com/vietnamwar/norodom-sihanouk/
Date published: April 7, 2018
Date accessed: May 15, 2021
Copyright: The content on this page may not be republished without our express permission. For more information on usage, please refer to our Terms of Use.