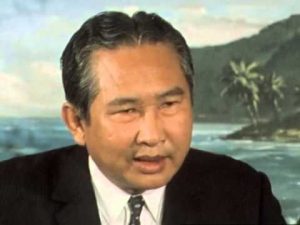 Lon Nol (1913-1985) was a Cambodian general and prime minister, best known for leading a coup against Norodom Sihanouk in 1970.

Lon Nol was born into an affluent family in Prey Veng province, his father a high ranking public servant. Like many Indochinese conservatives, Lon Nol became a Francophile, educated in French-speaking schools and employed by the French colonial regime.

At various times Lon Nol was a bureaucrat, a magistrate and a regional deputy governor. After World War II he joined the military to fight against communist insurgents. He was later appointed the chief of the Cambodian army (1955) and national defence minister (1960).

Popular with Cambodia’s wealthy elites and Western governments, Lon Nol became Sihanouk’s deputy prime minister in 1963 and prime minister in 1966. His working relationship with Sihanouk was strained and difficult. Sihanouk wanted Cambodia to remain as neutral as possible, avoiding Cold War allegiances and intrigues. Lon Nol, however, was pro-Western and openly courted the support of Washington.

Tensions between the two leaders worsened during mid-1969 after US planes bombed eastern Cambodia. In March 1970 Sihanouk embarked on a global tour that included visits to Paris, Moscow, Beijing and Hanoi. Nol used Sihanouk’s absence to depose him, claiming emergency powers and control of the government. In October 1970, he proclaimed himself president of the newly created Khmer Republic.

Nol suffered a serious stroke in February 1971 but refused to relinquish power. His domestic rule was chaotic and ineffectual and his policies were increasingly anti-democratic.

In April 1971, Nol promoted himself to field marshal. He later abolished the National Assembly (October 1971) and merged the presidency and prime ministership, giving himself supreme power (March 1972).

As president, Nol aligned his government with the US and South Vietnam. Their forces were given free rein to operate inside Cambodian borders.

As support for the communists grew, Cambodia fell into a state of civil war and Lon Nol lost the confidence of his American backers. He resigned and fled the country in April 1975, after receiving a $US1 million bribe.

He spent the rest of his life in exile in Indonesia, Hawaii and California, dying in November 1985.

This website is created and maintained by Alpha History. It contains 184,073 words in 261 pages and was updated last on January 30th 2021. For more information, please visit our FAQ or Terms of Use.