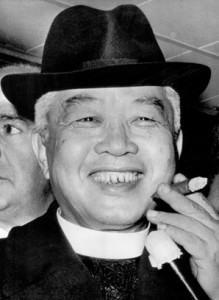 Ngo Dinh Thuc (1897-1984) was a Roman Catholic archbishop and the older brother of Ngo Dinh Diem and Ngo Dinh Nhu. He was responsible for introducing Diem to American power brokers and was later a member of Diem’s corrupt family circle.

Born in Hue, Thuc spent his childhood in seminaries, studying to enter the priesthood. He was ordained in 1925 and spent three years studying and teaching in Paris and Rome. He returned to Vietnam, where he taught trainee priests.

In 1938, Thuc was consecrated as an archbishop, only the third Vietnamese Catholic to reach the higher clergy. Like his brother Diem, Thuc supported an independent and self-governing Vietnam. He often urged young Catholics to join nationalist and left-wing political groups, a habit that saw him arrested by the French in 1945.

In 1950, Thuc and Diem embarked on a visit to Rome, via Japan and the United States. While in America they met with influential Catholics and State Department officials and proposed the creation of a Catholic-based Vietnamese government. Now with contacts in the US, Diem returned there in January 1951.

Thuc returned to Vietnam and in 1960 was named as Archbishop of Hue. His leadership there was mired in graft and corruption. Thuc misused the authority of the church and his ties with Diem, usually to favour Catholics. Land and assets were seized from villages and peasants, then redistributed to Catholic villagers or clergy. Financial aid and relief supplies were given to Catholics ahead of Buddhists.

Thuc was in Rome in late 1963 so fortuitously escaped the November coup that saw his brothers killed. He never returned to Vietnam, living out his years in exile, first in Rome and later in Missouri, US.