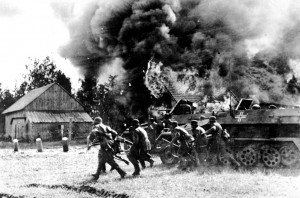 The mass murder of European Jews could not have occurred without World War II. This global war gave the Nazis both a pretext for genocide and the cover under which they could perpetrate it.

In January 1939, Adolf Hitler told the German Reichstag (parliament) that if “international Jewry… should succeed in plunging the nations into a world war yet again then the outcome will not be… the annihilation of the Jewish race in Europe”.

Despite this claim, it was Hitler himself who was directly responsible for the outbreak of war. From the mid-1930s, the Nazi leader, steered Germany towards war, despite frequent assertions that he desired only peace.

Hitler’s true aim, which was frequently expressed, was to meld the German-speaking peoples of Europe into a mighty super-state, the so-called Third Reich. To house and feed them required the acquisition of lebensraum (‘living space’) from eastern European nations like Poland and Soviet Russia.

How Hitler precipitated and then triggered World War II is a complex story that cannot be told in full here. What can be said is that until September 1939, no major European power was willing to stand against Nazi Germany.

After his ascension in 1933, Hitler repeatedly broke the terms of the Treaty of Versailles (1919), a document he loathed, by rearming and expanding the German army, sending troops into the demilitarised Rhineland (1936) and uniting Germany with Austria (1938).

In 1935, the Nazi leader introduced conscription and expanded the German army to 600,000 men, six times the limits contained in the terms of the Versailles treaty. Hitler’s other contraventions of the treaty included a program of naval expansion, the construction of U-boats and the formation of an air force (Luftwaffe). Very little of this was carried out in secret.

In 1936, Hitler tested the binds of Versailles by sending German troops into the Rhineland, an area deemed to be ‘de-militarised’ by the 1919 treaty. Though this move risked war with France, the remilitarisation of the Rhineland was met only with diplomatic protests.

Hitler then turned his attention to Austria, the country of his birth. After World War I there was considerable support for the Anschluss [unification] of Germany and Austria – but such a move was explicitly banned.

Hitler had no intentions of honouring this and, in March 1938, German troops entered Austria, linking up with the local Austrian Nazi movement. They convened a national plebiscite [vote] the following month that saw almost three-quarters of Austrians vote in favour of unification. From that point, Austrian Jews would share the same fate as those in Germany.

After the union with Austria, Hitler’s focus moved to the Sudetenland, a western province of Czechoslovakia with a majority of German-speaking residents.

Hitler demanded the Czechoslovak government in Prague surrender the Sudetenland to Germany, claiming that ethnic Germans there were being victimised and politically excluded. He threatened war if they refused or if other European powers intervened.

As had occurred in Austria, Hitler’s claims were supported by a small but vocal pro-Nazi contingent within the Sudetenland itself. The Sudeten crisis drew in other European leaders, some of whom talked tough about Hitler and his expansionist ambitions.

The governments of Europe had no appetite for war with Nazi Germany, however, particularly over a small province in landlocked central Europe. At diplomatic conferences in Munich in September 1938, Britain, France and Italy promised to acknowledge German annexation of the Sudetenland – in return for Hitler’s assurance that he would threaten or annex the rest of Czechoslovakia.

This approach, later dubbed ‘appeasement’, was hailed by many as a great victory for peace. But some, like British politician Winston Churchill, criticised the unwillingness of national leaders to stand against Hitler.

In August Hitler’s foreign minister signed a non-aggression pact with the Soviet Union, clearing the path to a Nazi invasion of Poland.

Just days later, on September 1st, Hitler sent his revived army hurtling across the Polish border. This time, however, Britain and France responded immediately. When Hitler ignored an ultimatum to withdraw from Poland, London and Paris declared war on Germany.

Despite the rapid onset of war, the next few months were taken up with military preparation and mobilisation rather than major fighting. By the middle of 1940, however, Hitler’s war machine was ready for a full-scale invasion of Europe.

The occupation of Europe

In contrast to the failed offensives of World War I, the speed and effectiveness of blitzkrieg were almost unanswerable. Within six weeks of crossing the French border, German troops were rolling into Paris. Within two months the governments of France, Holland, Belgium and Luxembourg had all surrendered.

For the next four years, most of western Europe was occupied and ruled by the iron fist of Hitler’s Schutzstaffel (SS). Under the dark cloak of war and occupation, the SS would begin the process that would lead to the extermination of millions of European Jews.

“The news that Germany had invaded Poland was blazoned in headlines on the front page of the local newspaper thrust into my hands. It was September 1st 1939, and I was breakfasting on the terrace of a hotel in Fez. The Germans, I was convinced, had committed an act of suicidal folly. Britain had the world’s most powerful navy, France the world’s finest army… The end would come quickly, probably before Christmas and with little difficulty.”
Patrick Turnbull, writer

1. Hitler craved lebensraum or ‘living space’ for the German people, to come from nations to the east.

2. In 1938, the Nazi leader began a program of expansion by unifying with Austria, contrary to the Versailles treaty.

3. Hitler then moved against the Sudentenland in 1938, and Czechoslovakia the following year, expansion that was allowed by the Allies in return for promises of peace.

4. In September 1939, the Germans secured a non-aggression treaty with the Soviet Union and invaded and occupied western Poland, sparking World War II.

5. Their battle tactics (blitzkrieg) involved use of aircraft and vehicles for rapid assaults and movement.