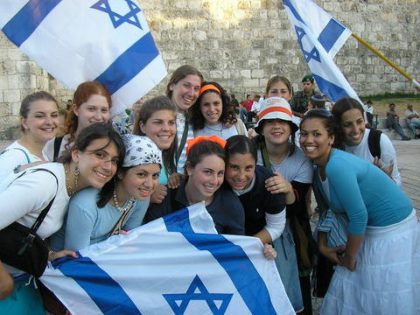 Before undertaking any study of anti-Semitism and the Holocaust, it is important to learn about the Jewish people, its principal victims. This page provides a brief summary of the Jewish people, who they are and where they come from. It also contains a brief introduction to Judaism, the Jewish religion.

Jews are an ethnoreligious group, which means they share an ethnic and racial heritage as well as similar religious beliefs. They have been a small but significant group in human civilisation for thousands of years.

Today, Jews constitute a very low percentage of the world’s population; most studies put this at around 0.2 per cent. In 2007, the Jewish People Policy Planning Institute reported the world population of Jews to be approximately 13.2 million people or less than three-quarters of the population of Australia. North America (6.8 million) and Israel (6 million) have by far the largest Jewish populations.

Approximately 9.5 million Jews lived in before World War II and the Holocaust; today there are only around 1.6 million Jews living there. Around 125,000 Jews live in Australia, many of them direct descendants of wartime refugees and Holocaust survivors.

The religion practised by Jewish people is called Judaism. Along with Christianity and Islam, Judaism is one of the three main Abrahamic religions (named because the Biblical figure Abraham is an important patriarch in all three religions).

Like Christianity and Islam, Judaism is a monotheistic religion because its followers believe in and worship only one God. Religious Jews hold different beliefs about God and divinity than the other Abrahamic religions. For example, Jews do not share the Christian view that Jesus Christ was the Son of God; instead, they believe that Christ falsely claimed to be the Messiah.

The most significant Jewish holy book is called the Torah, a Hebrew word that variably translates as “teaching”, “theory” or “guidance”. Religious teachers in Judaism are called rabbis, while Jewish places of worship are called synagogues. The Jewish holy day, or Sabbath, begins at sundown on Friday and continues until the first stars are seen on Saturday evening.

Jews are not permitted to work or play sport on the Sabbath. Instead, they are encouraged to relax, give thanks and spend time with their family.

As in other religions, Judaism contains a considerable diversity of religious belief and worship. Not all Jews are religious or religiously active: many are atheist, agnostic or live secular lives. Regardless of this, their ethnic heritage means they are still considered to be Jewish.

Judaism also has different branches, based on differences of doctrine and interpretation. Orthodox Jews, for instance, embrace a much stricter interpretation of the Torah and the Talmud (Jewish oral traditions). They adhere to Jewish laws and customs more rigidly than more liberal branches of Judaism.

Some of the religious customs and ceremonies observed by most Jews include:

Brit Milah. The circumcision of the penis on the eighth day of a young male’s life.

Marriage. The happy couple are married beneath a chupah (canopy) which symbolises a happy home. At the conclusion of the ceremony, the groom breaks a glass with his foot, symbolising an act of mourning for the Great Temple and the continued struggle of the Jewish people.

Significant events in the Jewish religious calendar include:

Passover or Pesach. A week long holiday commemorating the exodus of Jewish people from Egypt.

Shavuot. A celebration of the revelation of the Torah to the Israelites on Mount Sinai, a mountain in modern day Egypt.

Sukkot. An event where Jews celebrate the resilience of their ancestors, the Israelites, who wandered the desert in search of the Holy Land promised to them by God. Jews traditionally celebrate in makeshift shelters, mimicking the shelter their ancestors would have used during their 40 years wandering the deserts.

Rosh Hashanah. The Jewish New Year, a ten-day period where Jews pray for forgiveness and absolution of their sins during the previous year.

Yom Kippur. The most important of Jewish holy days is celebrated after the ten days of Rosh Hashanah. Many Jews spend Yom Kippur entirely inside the synagogue, praying for their sins to be absolved. They also fast (eat no food) as a sign of their commitment to a more pious life in the following year. Jews traditionally wear white on Yom Kippur.

Perhaps the best known Jewish religious custom is adhering to kashrut, the dietary laws governing what Jews may and may not eat. Food permitted to be eaten under kashrut is described as kosher.

Some of the foods Jews may not consume include meat made from the flesh of pigs (such as pork, ham or bacon), rabbit and kangaroo, food containing blood or any shellfish (including prawns, lobsters, oysters and mussels).

For meat to be considered kosher, animals must be killed by religious slaughter (shechita). This involves the cutting of the throat with a very sharp blade so that the windpipe, oesophagus and major veins are all severed and the animal bleeds to death quickly.

Contrary to myth and stereotype, Jewish people have no physical features in common. Their appearances vary considerably and many are not discernible from other members of society.

Jews can sometimes be identified by traditional items of clothing, usually worn on holy days or at times of worship. The best-known of these is probably the kippah or yarmulke, a small skullcap worn by males on the crown of their head. The tzitzit, or prayer shawl, has knotted fringes on its four corners; it can be worn by both males and females.

1. Jews are a minority group whose members share both a racial and religious heritage. Jews comprise around 0.2% of the world’s population.

2. Like Christianity and Islam, the religion of Judaism emanated from the prophet Abraham and is monotheistic (belief in one god).

3. There is a diversity of religious beliefs in Judaism, with mainstream and Orthodox branches as well as secular or non-practising Jews.

4. Most Jews follow social and religious customs, such as the circumcision of infant boys, adulthood ceremonies and various holy days.

5. Most Jews also follow dietary restrictions called kashrut, eating only kosher food and avoiding meats such as pork and shellfish.

Citation information
Title: “The Jewish people”
Authors: Jennifer Llewellyn, Steve Thompson
Publisher: Alpha History
URL: https://alphahistory.com/holocaust/the-jewish-people/
Date published: July 20, 2020
Date accessed: January 26, 2023
Copyright: The content on this page may not be republished without our express permission. For more information on usage, please refer to our Terms of Use.