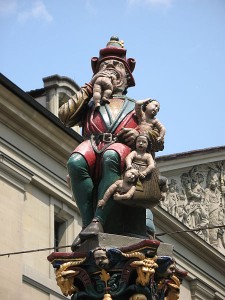 At the heart of medieval anti-Semitism – and still occasionally found in some modern forms – was a dark conspiracy theory called the ‘blood libel’. It is a baseless but widespread claim that Jews engage in the kidnap, torture and sacrifice of Christian children.

The reasons that Jews engage in these alleged child murders varied, though in many cases, the blood of the victim is said to be put to ritual or ceremonial use.

The blood of virginal Christian children, according to medieval conspiracy theorists, was highly prized by Jews. In some anti-Semitic stories, they would use the blood harvested from these sacrifices to make their matzoh (unleavened bread).

In other accounts, Jewish elders were said to drink blood in mockery of the Christian Eucharist (the drinking of wine representing the blood of Christ). In various renditions of the blood libel, the young victim is bled dry, gutted, flayed, crucified, marked with stigmata (the wounds of Christ) or bedecked with a crown of thorns.

Though the origins of the blood libel are not known, it probably dates back to ancient times when Jews were demonised with accusations of ritual sacrifice. Some chroniclers even accused them of murdering their own children. The Biblical story of Abraham, who was willing to sacrifice his own son Isaac to God, is sometimes offered up in support of this theory.

In reality, there is no historical or scriptural tradition of human sacrifice in Judaism. Murder is explicitly forbidden in the Torah while Jewish dietary laws (kashrut) prohibit the consumption of any type of blood.

According to kashrut, animal flesh must be ritually slaughtered and drained of all blood (shechita) before it can be butchered and prepared for human consumption.

Participants in the First Crusade (late 11th century) may have introduced stories of Jewish sacrifices and ritual murders into Europe. One of the first documented accounts dates back to 1141, when an English boy, William of Norwich, was reportedly kidnapped and murdered by Jews.

According to legend, William was tortured and crucified, his forehead lacerated as a mockery of the wounds inflicted on Christ by his crown-of-thorns. William’s kidnappers allegedly drained his body of blood, which they either drank or used to make bread.

Though none of this was supported by evidence, and the account was later rejected by the Pope, the story of William of Norwich became an oral myth that endured for generations.

Examples of the blood libel

Some other examples of the blood libel include:

The body of a young boy named Robert was found. According to some reports, he had been ritually murdered on Good Friday. Robert’s death triggered a pogrom against local Jews. More than 50 were killed and the rest were expelled from the area.

Three boys disappeared after last being spotted on a frozen river. According to testimony from some, the boys were slaughtered by a group of Jews. More than 300 Jews were burned at the stake. The bodies of the three boys were recovered in the spring; they had been drowned, not ritually murdered.

The disappearance of a young choirboy, Dominguito de Val, was immediately blamed on the local Jewish community. According to legend, Dominguito was sacrificed because he sang Christian hymns on the streets, an act that infuriated Jewish hawkers. A coven of Jews reportedly murdered Dominguito and threw his heart into the town’s river. Sixteen Jews were hanged and others were persecuted, despite there being no evidence of Dominguito’s body or of his fate.

The body of a nine-year-old boy named Hugh was found at the bottom of a well. A local Jew was arrested and confessed to his murder, probably under torture. The ‘crime’ provided the English king, Henry III, with a pretext for arresting wealthy Jews and seizing their property. Several dozen Jews were detained in the Tower of London; 18 were hanged for refusing to participate in an investigation into ritual murders. ‘Little Hugh of Lincoln’ was rushed into sainthood, though this was never formally endorsed by the Catholic Church.

The body of a teenage boy named Werner was discovered floating in the Rhine. His death was ascribed to Jews, who suffered years of violence and persecution, despite repeated pleas for calm by local rulers. Seven years later, Jews in Bern were also blamed for the death of a young child named Rudolph.

A two-year-old boy named Simeon vanished at a time when anti-Jewish sentiment was at its peak. Local Jews were immediately blamed for Simon’s disappearance. Jewish leaders were arrested, detained and tortured; some of them confessed under torture. Fifteen Jews were executed, while Simeon – like other ‘victims’ of alleged ritual murders – was rushed into sainthood.

The disappearance of a nine-year-old boy triggered anti-Jewish riots. Thirty Jews are rounded up and burned at the stake, after confessing under torture to the boy’s murder. The boy was later found alive and well; he had been kidnapped by a local man who owed large sums to Jewish money-lenders.

By the 14th century, the blood libel was accepted as fact across much of Europe. Whenever a child went missing or was found murdered, the first shadow of suspicion fell on nearby populations of Jews.

Blood libels triggered dozens of pogroms and anti-Jewish campaigns across Europe, most notably in Spain, France, the German states and Russia.

At various times, the blood libel was rejected by the Catholic Church. At other times, it was actively supported by the pope, members of the higher clergy or agents of the church, such as the Spanish Inquisition.

Though there were fewer instances of the blood libel during the Reformation and early modern periods, at least eight different accounts were recorded during the 1800s (see 19th century anti-Semitism).

“The story begins with the discovery of a child’s body. Most commonly it is a boy, though occasionally it could be more than one child or a girl. The body might be discovered in a sewer drainage ditch, perhaps in a wood. The setting is generally a medieval town. The child is a Christian and he is young. He could be two years old or twelve. He might have been missing for days, or just overnight. But the body’s discovery is only the beginning.”
Hannah Johnson, historian

1. The blood libel is a long-surviving myth that suggests Jews abduct and murder Christian children.

2. According to this myth, they do this to use Christian blood, either as food or for ritual purposes.

3. Though this myth is unsupported by evidence, it was widely accepted as fact during the Middle Ages.

4. Numerous instances of missing or murdered children were blamed on Jews, who were targeted in response.

5. The blood libel survived into the 19th and even the 20th centuries, particularly in Russia and eastern Europe.

Citation information
Title: “The blood libel”
Authors: Jennifer Llewellyn, Steve Thompson
Publisher: Alpha History
URL: https://alphahistory.com/holocaust/the-blood-libel/
Date published: July 23, 2020
Date accessed: June 27, 2022
Copyright: The content on this page may not be republished without our express permission. For more information on usage, please refer to our Terms of Use.