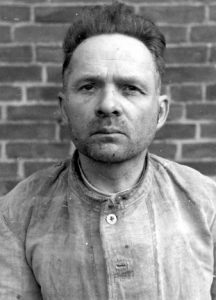 Rudolf Hoess or Höss (1901-1947) was a Schutzstaffel (SS) officer who became the first and longest-serving commandant of the notorious Auschwitz-Birkenau concentration facility. It was under Hoess’ command that Auschwitz became a death camp tasked with mass extermination of Jews and other minorities.

Rudolf Hoess was born into an affluent middle-class merchant family in Baden-Baden, southern Germany. His father was a devout Catholic and strict disciplinarian and determined that young Rudolf enter the priesthood.

At age 14, Hoess ran away from home and enlisted in the German army to serve in World War I. He spent most of the war in the Middle East, serving alongside the Ottoman army and being decorated several times. By the age of 17, he was the youngest sergeant in the German army.

After the war, the now orphaned Hoess became involved in the nationalist Freikorps. He later engaged in terrorism and sabotage against French troops in the occupied Ruhr. One of Hoess’ actions was the murder of a schoolteacher suspected of informing on Albert Leo Schlageter, an executed German nationalist and who became a martyr for the Nazi movement. Hoess served five years in prison for this crime.

Hoess eventually joined the NSDAP in 1922. He became a great admirer of Heinrich Himmler and joined the growing SS in 1934. A few months later, he was posted to Dachau concentration camp as a barracks officer. The entirety of his military career would be spent in the camp system.

In 1940 Hoess, by now a captain, was ordered to oversee the construction of a concentration camp near the town of Oswiecim in southern Poland. Initially housing a few hundred Soviet prisoners-of-war and Polish dissidents, this camp became known as Auschwitz. Hoess followed his closely but also drew on his own experiences to develop efficiencies in its management.

In June 1941, Hoess received secret orders from Himmler to begin preparing Auschwitz as a place for exterminating large numbers of Jews. He conducted several experiments with gassing, finally settling on the use of Zyklon-B. Under Hoess’ command, Auschwitz-Birkenau became the largest death camp in Nazi-occupied Europe.

Hoess was replaced in late 1943, possibly due to allegations of an affair with a non-Jewish inmate. He worked in the SS bureaucracy then went into hiding after the war. He was discovered by British soldiers in March 1946 and committed for trial at Nuremberg, where he gave frank and detailed accounts of his involvement in the mass killings at Auschwitz.

Rudolf Hoess was sentenced to death in April 1947. Two weeks later, he was hanged next to one of the crematoria at Auschwitz. In his final writings, Hoess expressed remorse for his crimes and regret for having embraced Nazi ideology and racial propaganda.