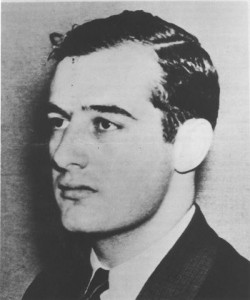 Raoul Wallenberg (1912-1947) was a Swedish architect and diplomat whose actions saved a large number of Hungarian Jews, possibly as many as 100,000, from the Final Solution. He disappeared towards the end of World War II and was probably murdered by agents of the Soviet Union.

Raoul Wallenberg was born in Kappsta, near Stockholm. The Wallenbergs were a prominent family in Sweden, boasting successful politicians, diplomats and businessmen. Raoul’s father, a former naval officer, died three months before his birth.

Wallenberg enjoyed a stable and happy childhood, raised by his mother, stepfather and grandfather. He completed high school, excelling in Russian and art, then completed a short stint in the Swedish military. In 1931, Wallenberg travelled to the United States, where he completed an architecture degree from the University of Michigan.

After graduating, Wallenberg worked as a businessman in South Africa, then for a Dutch bank in Haifa, Palestine. In Haifa, he worked alongside and became friends with many Jews, including some who had fled from Nazi persecution in Germany.

During the early 1940s, Wallenberg worked for a Swedish company engaged in selling and exporting food in Europe. This work often required travel into Nazi-occupied regions and Wallenberg became aware of the brutal actions and policies being used in these places. He also created ‘safe houses’ under Swedish diplomatic protection and saved countless Jews from deportation by handing out diplomatic papers as they boarded trains to the camps.

These actions placed Wallenberg at significant risk and the Schutzstaffel (SS) and Gestapo made at least two attempts to assassinate him. Wallenberg relied on spies and informers for information and he was able to coerce, cajole or bribe local Nazi officials. By the end of 1944, Wallenberg’s actions saved an undetermined number of Jewish lives in Hungary, perhaps as many as 100,000 people.

Wallenberg himself disappeared in January 1945 after being detained by the Soviet Red Army. His fate is unclear but it seems likely he was executed or died in a Russian prison sometime in 1947. The reasons for his arrest and detention have never been revealed.