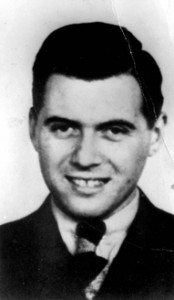 Josef Mengele (1911-1979) was a German physician who served in the Schutzstaffel (SS) during World War II. Posted to Auschwitz-Birkenau between 1943 and early 1945, Mengele conducted a series of barbaric medical experiments on Jewish and non-Jewish inmates.

Born in Gunzburg, Bavaria, Mengele’s parents were affluent enough to provide him with a good Catholic education. His peers recalled him as an ambitious but popular and friendly student.

After completing high school, Mengele studied philosophy and anthropology before completing a medical degree in 1938. His doctorate was completed under Otmar Freiherr von Frankfurt, a scientist who specialised in genetics and the reproduction of twins.

Mengele joined the Nazi Party in 1937 and the SS the following year. Though intensely anti-Semitic, it is likely Mengele was attracted to the party’s racial and eugenics theories more than its politics. He served in a combat division of the army early in World War II before transferring to the Waffen-SS as a medic and obtaining a commission.

After being wounded in 1942, Mengele was given an administrative role in Berlin. Early the following year, he applied to join the Totenkopfverbände or concentration camp service. He arrived in Auschwitz in May 1943 and was placed in charge of Romany prisoners in the Birkenau sub-camp.

Mengele’s official duties at Auschwitz were overseeing medical treatments provided by inmate doctors, carrying out selections and supervising the mass gassing of inmates. He carried out these difficult tasks in a nonchalant, sometimes even cheerful manner, while smiling, laughing and whistling.

While in Auschwitz, Mengele carried out a program of medical experiments on inmates, focusing on genetics and hereditary factors. For this reason, he was particularly interested in twins, pregnant women and those with physical or genetic abnormalities, such as dwarves. Suitable candidates were picked out by Mengele during selections or furnished to him by other SS officers.

Mengele’s human subjects received better accommodation and food than other prisoners – but his experiments were conducted without anaesthetic or pain relief and few survived them. This led to his camp nickname, the ‘Angel of Death’. Mengele’s experiments are too diverse and ghastly to list here but included injections, organ removal, transplants, surgical attachment, impregnation and vivisection (dissection while alive).

In January 1945, Mengele fled Auschwitz carrying the records of his experiments. He was detained by American troops in June that year but was carrying false papers and released after several weeks.

Mengele remained underground in Germany until 1949 then sailed to Argentina, where he lived for a decade. Remarkably, he was able to obtain a passport and return to Germany for a holiday in 1956. Nazi hunters tracked him down soon after this and Mengele was forced to flee to Paraguay then Brazil. He died there in February 1979 while living under the name Wolfgang Gerhard.